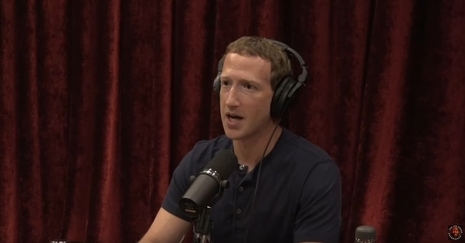 Headlines Thursday from both Bloomberg News and The Hill screeched that a letter from 35 House Republicans requesting records of communication between Zuckerberg and the FBI reflected a House GOP effort to “target” Facebook as part of a ploy to nab Hunter Biden.

“We have seen in recent months how some in government have sought to use Big Tech to censor divergent viewpoints and silence opposing political speech,” House Republicans wrote in the letter. “Government-driven and Big Tech-implemented censorship suppresses freedom of speech and free thought online in ways that harm public discourse. Facebook’s suppression of the Post article — and allegations of Biden family corruption highly relevant to the 2020 presidential election — following guidance from the FBI is highly troubling.”

Rather than focus on alleged corruption between Facebook and the government, Bloomberg focused on political ramifications of Republicans retaking the House next year. The rag warned the GOP would “focus heavily” on censorship, potentially by using its “subpoena power” and presenting a “risk” to tech companies “reviled by conservatives.”

The Hill wasn’t much better. That publication ignored the impact of Big Tech’s and Big Media’s censorship of the Hunter Biden scandals, which helped steal the 2020 election for Joe Biden. The Hill largely skirted the election issue, opting to portray the reduced distribution of the Hunter Biden story merely as being “argued” by House Republicans as preventing Americans from seeing the full picture of the Bidens’ alleged corruption.

The 35 lawmakers who signed the letter requested all “documents and communications” between Oct. 1, 2020, and now between any Facebook employee and “any individual affiliated with the FBI” regarding the New York Post’s reporting about the Biden family, as well as any communications between Joe Biden’s presidential campaign and Facebook during the same period.

House Republicans also asked Zuckerberg for records of any communications between Facebook and the FBI about “purported election misinformation” during the 2020 presidential election. The lawmakers gave Facebook until Sept. 15, to respond.

Facebook did not address an MRC Free Speech America request for comment on House Republicans’ letter, but instead pointed to previous tweets by the company representing that the revelations Zuckerberg made Aug. 25 on Joe Rogan’s podcast essentially mirrored what Zuckerberg said during an Oct. 28, 2020, Senate hearing.

The FBI “alerted us to be on heightened alert on a risk of hack-and-leak operations around a released trove of information,” Zuckerberg told senators, adding that the agency did not “specifically” tell Facebook the New York Post story was false.