MRC VP Dan Gainor: ‘Technology’ Could Be Closed to Conservatives

MRC Vice President Dan Gainor warned that conservatives would be closed off to the kinds of platforms they needed to succeed. Gainor was joined by congressmen, industry experts and religious figures to speak at an event hosted by the Repeal and Replace Section 230 Coalition.

“Every aspect of technology is now being closed off to the conservative movement,” said Gainor, describing what happened to free speech platform Parler. “Conservatives can lose their credit card and have their bank shut down. We’ve moved into a world now where the corporate world works in complete conjunction with the left.” 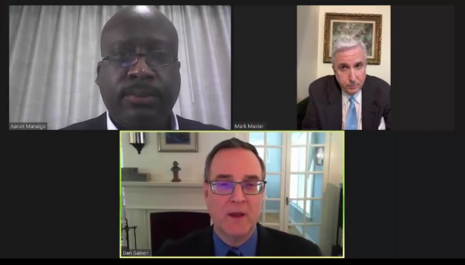 He continued with an idea to consider: “Conservatives need to talk about a wonky word that Washington loves: infrastructure. There needs to be a conservative infrastructure so that these companies can’t destroy us.”

The panel also featured Talk Radio Network CEO Mark Masters, who said “Since November, 75 million people who have voted for Trump have woken up to discover that they’ve been completely disenfranchised.” He called the online world “a virtual version of China.” McMasters also warned about the dangers to the future of both conservatism and talk radio with the passing of radio icon Rush Limbaugh.

Gainor highlighted the connections between Big Tech and traditional media, saying that they both got along pretty well because “they were both run by left-wing organizations and left-wing executives. They stir to push a liberal agenda in pretty much everything they do.”

He then said that while journalism used to be in favor of free speech and the First Amendment, it was so no longer. The outlets push for Big Tech to censor, and Big Tech usually listens. “Now you’ve got this whole network of journalist institutions, all working together to try to censor content they disagree with,” stated Gainor, referencing the mass censorship that happened to the New York Post over a Hunter Biden story in October before the election.

Big Tech went so far as to impact “a free nation’s election and silenced the president of the United States for complaining about how the election was run,” he concluded. Enough Biden voters were not able to see the New York Post story on the Biden connections to Ukraine and China to let it change their minds. An MRC poll found that had they read the story, they would have voted for Trump.