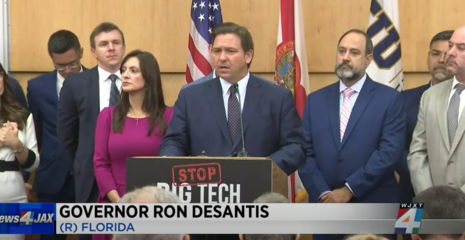 A Big Tech group reacted to Florida’s new free speech law, and it’s clear that it will seemingly do anything in its power to continue censoring conservatives online.

Big Tech group NetChoice begged a judge to block the law before it goes into effect. “NetChoice, the group suing on behalf of internet giants, has asked a federal judge to put the law on hold as their lawsuit moves through the courts,” Florida news outlet News4Jax reported.

NetChoice reportedly fought for Big Tech’s ability to censor. NetChoice Vice President and General Counsel Carl Szabo called the law “government-compelled speech,” according to News4Jax. “Government can’t come in and tell your network what type of news to cover, what types of stories to promote,” he said. “And likewise it can’t come in and tell private businesses like Facebook, YouTube, Etsy or Reddit the type of content that they have to host.”

NetChoice gave lip service to the First Amendment rights of Big Tech. However, the request to block the lawsuit could undercut the free speech rights of platform users. Former President Donald Trump was suspended from at least 10 platforms following the Jan. 6 riot at the U.S. Capitol after he called for “peace.” Facebook announced that the former president would be suspended for at least two years. Big Tech’s massive push to censor conservative voices resulted in the industry receiving an “F” grade from the Media Research Center in its first Big Tech Report Card.

To combat the constant barrage of censorship, Florida Governor Ron DeSantis (R) signed the state’s new pro-free speech law on May 24. The law prohibits platforms from deplatforming political candidates. It would impose a fine of $100,000 per day for statewide candidates and $10,000 per day for censoring other candidates.