Ocasio-Cortez ‘Will Not Apologize’ for Lie about Ted Cruz; Twitter Still Silent 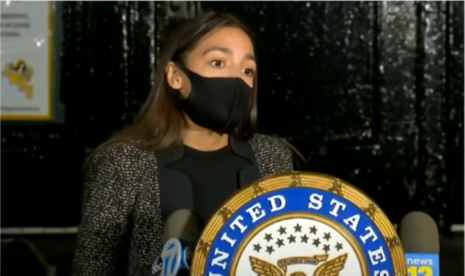 Rep. Alexandria Ocasio-Cortez (D-NY) lied and falsely accused Senator Ted Cruz (R-TX) of “trying to get [her] killed”, and has now refused to apologize for her lie. Twitter still has not taken any action against the tweet or against Ocasio-Cortez.

“Ok, so, that’s not the quote, and I will not apologize for what I said,” Ocasio-Cortez said to the New York Post. A reporter from the Post had asked about her tweet, in which she claimed that Ted Cruz “almost had [her] murdered”

Cruz tweeted his agreement with Ocasio-Cortez in her call for an investigation into the Robinhood app, but she promptly burned the olive branch he extended. “I am happy to work with Republicans on this issue where there’s common ground, but you almost had me murdered 3 weeks ago so you can sit this one out. Happy to work w/ almost any other GOP that aren’t trying to get me killed. In the meantime if you want to help, you can resign,” she tweeted.

Twitter has still not taken any action, despite the fact that Ocasio-Cortez has now refused to apologize. The platform did not respond to an inquiry from MRC TechWatch.

Apparently, the left can accuse a sitting U.S. senator of attempted murder with no repercussions. Someone on the right, however, like MyPillow CEO Mike Lindell or anti-establishment journalism outlet Gateway Pundit, can’t call the results of the 2020 election into question. If they do so, they are permanently suspended from the platform.

Twitter censored former President Donald Trump 625 times between May 31, 2018 and January 4, 2021, after which he was banned from the platform altogether. President Joe Biden was not censored at all during the same time span. After Trump and former First Lady Melania Trump were diagnosed with COVID-19 in October, Twitter allowed multiple tweets wishing harm or death upon the couple. The phrase “Hang Mike Pence” also trended on the platform following the suspension of Trump’s account.