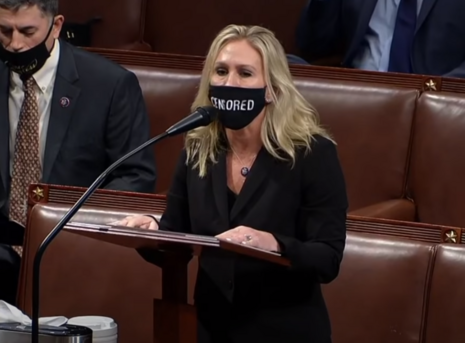 Twitter censored another member of the U.S. government, but she quickly fired back, calling out Twitter’s hypocrisy.

The suspension reportedly came after Greene tweeted: “The 1/5 disaster in Georgia lays solely in the hands of state leadership who failed voters in our state. @GaSecofState and @GabrielSterling were begged by Republicans to fix our elections. They did nothing. They are to blame, not me, not @realDonaldTrump, not @CollinsforGA,” according to the Washington Examiner. The tweet included a label that said, “This claim of election fraud is disputed, and this Tweet can’t be replied to, Retweeted, or liked due to a risk of violence.”

Twitter updated its policies in January to say “Any attempts to undermine the integrity of our service is antithetical to our fundamental rights and undermines the core tenets of freedom of expression.” The platform, ironically, called free expression “the value upon which our company is based.”

She continued: “Yet you continuously abuse conservative’s opinions and free speech by canceling us. You see suspending and banning people every time one of the self appointed twitter police cries “@twittersafety!” when their feelings… are terribly hurt by reading a tweet they disagree with does not make it the right thing to do.”

Twitter banned President Donald Trump from the website following the Jan. 6 riot at the U.S Capitol building. Meanwhile, Twitter did not put a label on Iran's Supreme Leader Imam Sayyid Ali Khamenei’s comments when he advocated for the destruction of Israel. The ayatollah said in a tweet: “The elimination of the Zionist regime does not mean the massacre of the Jewish ppl. The ppl of Palestine should hold a referendum. Any political sys they vote for should govern in all of Palestine. The only remedy until the removal of the Zionist regime is firm, armed resistance."

Twitter also allowed Lijian Zhao, the spokesperson for the Information Department of China’s Foreign Ministry to scapegoat the U.S. military as the source of COVID-19. The platform even allowed a video from the Chinese embassy in France entitled “Once Upon a Virus” to be posted on the platform. The video contained several myths and suggested that the Chinese government and the World Health Organization were forthcoming about the virus. They were not.

Conservatives are under attack. Contact Twitter at (415) 222-9670 and demand that Big Tech be held to account to mirror the First Amendment while providing transparency and protections for exploited individuals abroad. If you have been censored, contact us at the Media Research Center contact form, and help us hold Big Tech accountable.