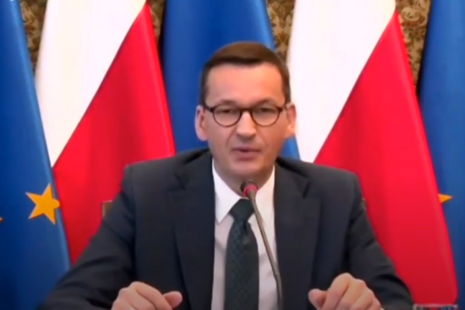 Conservatives have faced a barrage of censorship in the last few weeks, but at least one European country is standing up against Big Tech.

Polish Prime Minister Mateusz Morawiecki expressed his desire for an open and free internet without censorship in a Facebook post.

For Morawiecki, the fight for free speech appears to be very personal. “For close to 50 years we lived in a country in which censorship was practiced, in which Big Brother told us how we are meant to live and what we are meant to feel, and what we are not allowed to think, say or write. That is why we are so concerned with any attempt to limit freedom,” he said.

“We are now increasingly faced with practices we believed were left in the past. The censoring of free speech, once the domain of totalitarian and authoritarian regimes, is now back, but in a new form, run by corporations, who silence those who think differently,” Morawiecki continued.

“Everything which is not forbidden is allowed. Also on the internet, [t]here is no tolerance for censorship, nor can there ever be. No tolerance for state censorship, such as the one Poland faced under communism, or the private type, which we are seeing today. Freedom of speech is a cornerstone of democracy - that is why we must defend it. It is not up to algorithms or the owners of huge corporations to decide what opinions are correct and which aren’t,” he said.

Poland’s leader has started to take the issue of online censorship very seriously. “A draft law being readied in Poland will make it illegal for tech companies to take similar actions there,” The Guardian reported.

In recent months, Poland has stepped up in the fight against censorship online. In December, Polish Justice Minister Zbigniew Ziobro announced a legal initiative to allow users to file complaints if their posts were removed. The initiate would also create a specific court for the freedom of speech. And Poland is not alone. Mexican president Andrés Manuel López Obrador announced that he would lead an international coalition of global leaders against the censorship of President Donald Trump online.

“Social media platforms have to serve us, and not the interests of their powerful owners. Everyone has the right to freedom of speech. Poland will defend that right,” Morawiecki said in his Facebook post.