MRC’s Gainor on Tucker: New Study on ‘How Far Big Tech Will Go’ to Protect Biden 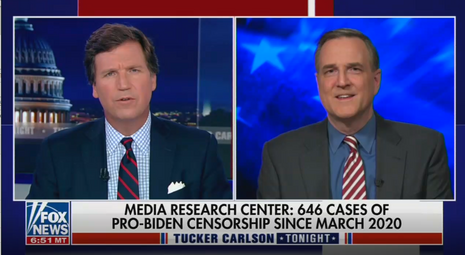 Gainor joined the April 20 edition of Tucker Carlson Tonight on Fox News. “Tonight, the Media Research Center has new reporting on the scope of Big Tech’s efforts to keep your opinions hidden,” Fox News host Tucker Carlson said. Carlson pointed out that the MRC “found more than 640 examples of bans, deleted content and other speech restrictions placed on those who criticize Joe Biden on social media.”

Platforms featured in the upcoming study include censorship-obsessed companies like Facebook, Twitter, Instagram and TikTok. Gainor broke down the data MRC Free Speech America tallied through its unique CensorTrack database. He said the sheer extent of the censorship of Biden's critics showed “just how far Big Tech will go to protect their president.”

“Big Tech coordinated to censor several high profile stories about Biden over the last year but most censorship online is hidden — you never hear about it, you don't know what's happening,” Carlson said at the top of the segment. Gainor pointed to Big Tech’s vendetta to censor people who talked about the notorious Hunter Biden scandal involving his laptop as a prime example. “You’re talking about major players being censored: obviously President Trump, Don Trump Jr., [Rep.] Kevin McCarthy (R-CA), [Sen.] Ted Cruz (R-TX). You go down the line — major publications.”

But, as Gainor noted, “that wasn’t even the only category.” In fact, “[w]e found more than 230 examples of people getting censored for creepy Joe Biden stories,” such as his inappropriate behavior around women and children, Gainor analyzed.

Carlson summarized that even “making fun of Biden is not allowed.” He proceeded to ask Gainor if the MRC had discovered any cases of people getting censored for criticizing popular right-wing figures like Trump or Rep. Marjorie Taylor Greene (R-GA). “No we didn’t,” Gainor said definitively. Gainor directed Carlson to a previous MRC Free Speech America study on the 2020 election which found that Trump and his campaign were “censored 625 times — zero for the Biden campaign.”

“How do you win an election — how do you have a free and fair election in an environment where only one side can talk,” Carlson questioned. Gainor didn’t pull punches: “You don’t. And it’s not just the United States. Going long term, this is any democracy — any republic that has elections — Big Tech can stamp all over it.”

Gainor concluded his lambasting of Big Tech by citing another MRC study which found that Big Tech overwhelmingly censored Republican members of Congress in comparison to Democrats by a 54-to-1 margin.