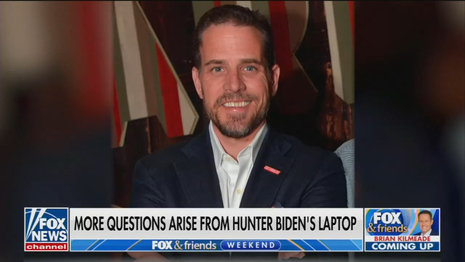 So-called fact-checkers should be eating crow following authentication of the emails from Hunter Biden’s notorious laptop by The New York Times. But a new analysis shows they’re being as brazen as ever by not updating old articles challenging the credibility of the story.

Leftist fact-checkers like FactCheck.org, PolitiFact and Lead Stories published stories within the past two years that tried to take down the New York Post bombshell. The outlets did this by either referring to the story as coming from “questionable sources;” labeling the emails as “unverified” or outright doubting their authenticity.

The Times reported that emails from a cache discovered on Hunter Biden’s abandoned laptop in Delaware “were authenticated by people familiar with them” and tied the documents to an ongoing federal investigation. It has been 12 days since The Times released its report on the Biden laptop, and FactCheck.org, PolitiFact and LeadStories still haven't updated certain articles on the matter.

All three outlets are fact-checking partners with liberal Big Tech giant Meta, which is the parent company of both Facebook and Instagram.

FactCheck.org was arguably the worst of the three in a story headlined, “Trump Revives False Narrative on Biden and Ukraine.” The outlet castigated former President Donald Trump for citing the Post “to revive his widely discredited claim that Biden ‘went to Ukraine and threatened to withhold $1 billion in aid if they did not fire the prosecutor that was investigating his son and the company that his son worked for.’” FactCheck.org ripped Trump for citing “unverified emails that were allegedly obtained in a bizarre way by his own lawyer.” [Emphasis added.]

In addition, the phony fact-check spun that this wasn’t the first time Trump was cited “using material obtained from questionable sources.” It even tried to smear the whole story as part of an elaborate scheme by former New York City Mayor Rudy Giuliani working with foreign contacts “to obtain information damaging to Biden.” Now that The Times verified the “unverified emails,” FactCheck.org still has yet to update its story saying otherwise. [Emphasis added.]

Lead Stories in particular, targeted an “exclusive” Daily Caller story on one of the laptop emails considered to be the “smoking gun” in the Post story.  The Daily Caller said in a tweet of its story that a cybersecurity expert concluded the “@nypost's smoking gun April 2015 Hunter Biden email from a Burisma executive discussing an introduction to then-Vice President Joe Biden is 100% authentic.”

Specifically, the expert that the Daily Caller cited used a “cryptographic signature [DomainKeys Identified Mail (DKIM)]  found in the email’s metadata” to verify Burisma advisor Vadym Pozharskyi thanking Hunter for “‘inviting me to DC and giving an opportunity to meet your father and spent [sic] some time together.’” Lead Stories tried to swat the story down in a fact-check: “That's a stretch: DKIM can validate who sent an email and what text and other content was included. But it does not prove if the content consists of true statements.”

According to Proofpoint, DKIM is a “protocol that allows an organization to take responsibility for transmitting a message by signing it in a way that mailbox providers can verify."

EXCLUSIVE: A cybersecurity expert told us that the @nypost's smoking gun April 2015 Hunter Biden email from a Burisma executive discussing an introduction to then-Vice President Joe Biden is 100% authentic

Here’s the problem: Not only did The Times verify the contents of the emails, but even Politico’s national political correspondent Ben Schreckinger specifically verified the “smoking gun” email in September 2021. “A person who had independent access to Hunter Biden’s emails confirmed he did receive a 2015 email from a Ukrainian businessman thanking him for the chance to meet Joe Biden,” Politico Playbook reported.

The New York Post editorial board — citing Schreckinger’s verification of two of the laptop emails — slammed how this was the “perfect example of how Democrats weaponize ‘fact checkers’ to deflect criticism and enlist social media to censor articles. Nothing to see here!”

The Lead Stories fact-check claimed the cybersecurity expert’s verification “doesn't tell the whole story.” Lead Stories even alleged that the email addresses appearing to belong to Hunter and the Burisma advisor connected to the emails in question could be fake:

[The cybersecurity expert’s analysis] does not verify that the accounts themselves are not fake -- nor does it show who controlled the accounts at the time in question. In theory, someone claiming to be Pozharskyi could have sent the email.

PolitiFact dismissed the emails by claiming it wasn’t able to “verify” them in an Oct. 15, 2020 story. The outlet also tried to gaslight readers on the “smoking gun” email between Hunter and the Burisma advisor by accusing the Post of shoddy work:

None of the emails included with the article, however, point to a meeting having taken place. And an image in the article of the email that the Post calls ‘blockbuster correspondence’ does not contain any of the metadata — such as a message ID number, and the time and date the email was created —  that would help establish the authenticity of an email,” [emphasis added.]

Well, how about now, PolitiFact?

Conservatives are under attack. Contact Lead Stories at (323) 762-3215, PolitiFact, and FactCheck.org at Editor@FactCheck.org and demand they update their stories on Hunter Biden's emails.