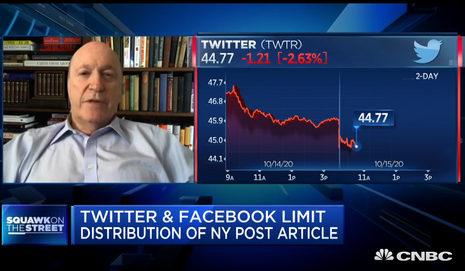 The New York Times recently confirmed what conservatives already knew — the Hunter Biden laptop emails were legitimate. The Times reported on Hunter’s laptop, tying emails found on the computer to a federal investigation.

Ruthless podcast host Comfortably Smug created a timeline in a Twitter thread outlining how NewsGuard attempted to bury the New York Post’s story and the newspaper’s credibility. Comfortably Smug called out Brill for claiming in an October 2020 interview that the story about Hunter’s laptop was a “hoax perpetrated by the Russians.” The podcast host also tweeted: “3/16/22: Huge ad agency [Magna] says they'll use NewsGuard to avoid placing ads on ‘unreliable’ news [.] 3/17/22: NYT says the laptop is real.”

The Times said the emails it found “appear[ed] to have come from a laptop abandoned by Mr. Biden in a Delaware repair shop. The email and others in the cache were authenticated by people familiar with them and with the investigation.” [Emphasis added.]

A story in three parts

10/20: NewsGuard CEO says the laptop is “a hoax perpetrated by the Russians” https://t.co/CjI7y10nrL

Brill went on the Oct. 15, 2020, edition of CNBC’s Squawk on the Street to rail on how social media companies that tried to ban the Post story “know absolutely nothing about what they’re doing.” Brill said those companies should follow Microsoft’s lead and use tools like NewsGuard to curate articles, supposedly for quality control.

Brill flaunted his leftist bias during this interview, even touting the disproven RussiaGate conspiracy theory: “My personal opinion is there’s a high likelihood this story is a hoax, and maybe even a hoax perpetrated by the Russians again.”

The NewsGuard CEO then said the Post report on Hunter Biden’s laptop appeared to be “phony”:

The nutrition label and the rating that we have for the New York Post would tell people that they tend to favor President Trump, that they’ve published irresponsible stuff in the past, and that would be a way to start this debate, which would be joined by other news organizations, which I hope are trying to report on the bona fides of what really looks like a phony story.

Ironically, NewsGuard itself is neither a reliable nor trustworthy source. A recent MRC study found that outlets rated “left” or “lean left” by AllSides received an average NewsGuard score of 93/100. Sites considered “right” or “lean right” by AllSides had an average NewsGuard rating of 66/100. Brill specifically even recently showcased his absurd bias by saying OAN and Fox News would potentially call the “Moon Landing” a “fraud” if it occurred under Biden.

The Post story in question documented purported emails from Hunter Biden reportedly exposing the alleged corrupt dealings of him and his father in Ukraine. Wikipedia co-founder Larry Sanger excoriated NewsGuard’s credibility in a Twitter thread of his own. “Let's be very clear. The purpose of enterprises like NewsGuard is to give a stamp of approval to already very powerful news organizations,” he tweeted. “It is simply another way to buff the credibility of Establishment organs like New York Times and discredit outlets that disagree with them.”

Let's be very clear. The purpose of enterprises like NewsGuard is to give a stamp of approval to already very powerful news organizations. It is simply another way to buff the credibility of Establishment organs like New York Times and discredit outlets that disagree with them.