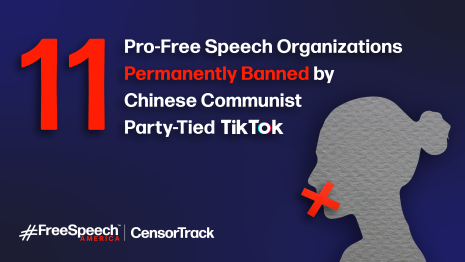 Using our exclusive CensorTrack database, MRC Free Speech America researchers found that TikTok canceled accounts associated with no fewer than 11 pro-free speech organizations since January 2019. Satire accounts, various pro-free speech groups and commentators, pro-life groups and even the MRC’s own MRCTV account, are among those that TikTok shut down.

(TikTok uses the term "permanently banned" when it bans accounts, even if those accounts are later restored by the platform.)

Censorship doesn’t belong in America, but TikTok seems to think it does.

The platform has deep ties with the Chinese Communist Party (CCP). The CCP has a board seat at TikTok’s parent company ByteDance, which also sold a 1-percent stake to WangTouZhongWen Technology, a Beijing company owned by three Chinese state entities, according to Reuters.

TikTok canceled the accounts of no fewer than 11 pro-free speech groups since January 2019, according to CensorTrack data. The platform did not provide an explanation for the permanent bans of accounts, like The Babylon Bee; Live Action and its President Lila Rose; American Constitutional Rights Union Executive Director Lt. Col. Allen West and even the Media Research Center’s own MRCTV.

MRC Free Speech America tracked TikTok’s permanent bans using our unique CensorTrack database. In every case analyzed, “permanently banned” TikTok users received the same exact notice. “Your account was permanently banned due to multiple violations of our Community Guidelines,” the notices read, with no further explanation or reason for the permanent ban. [Emphasis added.] (TikTok uses the term "permanently banned" when it bans accounts, even if those accounts are later restored by the platform.)

The CCP-tied platform also “permanently banned” PragerU and PragerU personality Amala Ekpunobi in April 2021. The platform allegedly banned each for “multiple violations” of its Community Guidelines. Like Judicial Watch, PragerU said it could not appeal the censorship.

"We have never received a reason, and we have never been successful having a decision reversed," a PragerU spokesperson told MRC Free Speech America.

In June 2021, PragerU tweeted that TikTok banned a second PragerU account, created to replace the first.

Podcaster Tim Pool said that the platform also “permanently banned” his podcast account. Pool commented on the platform’s radical banning practices in an October 2021 YouTube video explaining what happened. “With TikTok’s more extreme rules – and yes, TikTok is substantially more extreme than any of the other platforms, exemplified by the fact that I’m not banned on any other platform,” Pool said.

It’s unclear why the platform banned Pool’s account, but the ban occurred after he posted clips with controversial figure Alex Jones who has been banned from Facebook, Instagram, Twitter, YouTube and the Apple App Store since 2018. Pool explained in a YouTube video that his podcast “had problems with clips relating to Alex Jones, and recently they took down one of our videos. We appealed it. They restored it and said it was fine because Alex didn’t say anything against the rules.” TikTok later banned Pool’s account.

The platform is notorious for “permanently” banning users for a short period before reinstating the accounts. Again, when TikTok permanently bans users it does not provide an explanation why.

"My account (@lilaroselife) has been BANNED from @tiktok_us and @liveaction has been BANNED from advertising,” Rose tweeted. "This extreme political bias by Tiktok is a blatant double standard and places the lives of children in danger.” She noted later in the tweet thread that Planned Parenthood continues to post ads on the platform. The TikTok screenshot she shared simply said, "You [sic] account was banned," without explaining why.

Rose’s account remains banned, but the platform restored Live Action’s account within a day of permanently banning it. Screenshots indicate that the platform claimed the account was "inaccurately removed due to human error."

The CCP-affiliated platform has “permanently banned” Young America’s Foundation (YAF) at least three times. YAF confirmed for MRC Free Speech America that the most recent incident occurred when the platform removed all but two of its videos and “permanently banned” the organization on Aug. 5. The platform then restored the account the same day.

YAF spokeswoman Kara Zupkus talked about the censorship in exclusive comments with MRC Free Speech America. “TikTok’s attempts to censor what they deem as ‘hateful’ content opens the door for ideological-based discrimination,” she said. “What we are seeing is a crackdown on conservative content surrounding topics like transgenderism and Critical Race Theory––all because the Left knows their arguments can’t hold up to basic facts.”

TikTok’s temporary, “permanent” ban of SBA Pro-Life America’s account didn’t come without consequences. SBA Digital and Creative Director Andrew Moore told MRC Free Speech America that the organization “compared average views per video before the suspension vs. after the suspension.” He noted a 99-percent decrease in views per video following the reinstatement of SBA’s account. “On paper, they can say they lifted the suspension, but the reality is very different,” Moore said.

Students for Life of America (SFLA) told MRC Free Speech America that TikTok permanently banned its account for a second time, claiming the usual multiple community guidelines violations. It’s unclear if a specific video triggered the ban, but SFLA said TikTok also removed a video that "showed a pro-lifer saying that it was wrong that abortion supporters hope we get raped." TikTok restored the account after Students for Life appealed the platform's decision. TikTok did not reply to MRC Free Speech America’s request for comment at the time of publication.

The platform reportedly removed a video from SFLA’s account for slamming the baby-killing practice of abortion. SFLA tweeted screenshots of the TikTok violation notice alongside a video showing a woman calling out Planned Parenthood. "Planned Parenthood be like 'Abortion isn't the only thing we do.' Ok. You're still killing babies, my man. You ain't slick," she said. TikTok stated that the video violated the platform's community guidelines against so-called "Hate speech," according to purported screenshots.

ACRU’s West shared a screenshot indicating that TikTok also "permanently banned" his account on Aug. 12 due to “multiple violations of our Community Guidelines.” West said in a tweet that he has used TikTok for over a year, and his digital director told MRC Free Speech America that the account has never had any Community Guidelines violations.

It’s unclear if a specific post triggered the ban, but West said the suspension occurred after he shared a video about the FBI’s raid of former President Donald Trump’s home in Mar-a-Lago. TikTok did not respond to MRC Free Speech America’s request for comment at the time of publication but the platform later restored West’s account.

TikTok “permanently banned” The Babylon Bee in June with no explanation, or possibility for recourse, according to the satire site.

The Babylon Bee Editor-in-Chief Kyle Mann explained just how little information TikTok gave for the ban. "We got perma banned,” Mann tweeted on June 30. “They did not say why.”

The organization told MRC Free Speech America that the platform quietly reinstated its account Friday, Aug. 19 again without an explanation.

TikTok even banned a barely used account. The Daily Wire’s Knowles announced on his show The Michael Knowles Show in May that the platform banned his account. Knowles said he had previously posted some videos mocking National Institute of Allergies and Infectious Diseases Director Dr. Anthony Fauci and the public health response to COVID-19, but Knowles said he had posted nothing recently. "I have not accessed my TikTok in weeks," Knowles said. "There could not have been any new offending content on there. I did not receive any message as to why I was kicked off."

In addition to the two permanent bans, TikTok targeted MRCTV’s original account 45 times. TikTok gave no explanation for 29 of the 45 (64%) censorship cases against MRCTV. The platform censored MRCTV not only for alleged “hateful conduct,” “hateful behavior,” “harassment and bullying,” but also for alleged "integrity and authenticity" violations, "attacks and slurs on the basis of protected attributes” and “illegal activities and regulated goods.”

TikTok literally gives the CCP a seat at the board table, and the CCP doesn’t like to be insulted.

BlazeTV podcaster Steven Crowder made a video blasting Maoist communism, and the platform removed it for alleged “hate speech.” Crowder said he made the video hoping that TikTok would ban his account as part of a Twitter movement he started to #TrashTikTok.

"I failed," he said in a video explaining what happened. He showed snippets of the deleted video where he made statements like “Mao's ‘Great Leap Forward’ led to the death of 45 million Chinese citizens. On June 4, 1989 the CCP murdered thousands of protestors at the Tiananmen Square,” and “Taiwan is, in fact, a real country and in fact not part of China." The platform later reinstated the video according to Crowder, but as of Aug. 9, the video is no longer available.

The Atlas Society, an organization that promotes the late author Ayn Rand’s philosophy of objectivism, told MRC Free Speech America that TikTok censored two of its videos. One Jennifer Grossman. Grossman said the organization appealed, and the platform later reinstated the video.

The platform censored another one of The Atlas Society’s videos that featured Elon Musk using a flamethrower. The text on the video said, "Elon Musk walking into the Twitter boardroom like:" The Atlas Society captioned the post, "Wonder If They Saw This Coming!" TikTok removed the video for violating its community guidelines on "

Sometimes TikTok Can’t make up its mind about why it removed a video.

"First of all, he was acquitted. And second of all, he was enrolled as an online student. Therefore, he will never interact with any of these social justice warriors,” she said. “Therefore, they are trying to deny this young man a college education simply because they disagree with his beliefs and his actions. That is a dangerous precedent to set."

Fox News reported – and purported screenshots tweeted by YAL corroborated – that TikTok initially flagged YAL’s video for "hate speech." YAL told Fox News that after an appeal, TikTok deleted the video "twenty minutes later." YAL also said TikTok's only explanation for the removal was that the video depicted "illegal activities and regulated goods,” according to Fox News. The outlet speculated that the platform removed the video due to pictures of Rittenhouse with his gun during the Kenosha race riots of 2020. TikTok later reinstated the video.

Conservatives are under attack. Contact TikTok via email at feedback@tiktok.com or by mail at 10010 Venice Blvd #301, Culver City, CA 90232 and demand that Big Tech be held to account to mirror the First Amendment, provide clarity on hate speech and equal footing for conservatives. If you have been censored, contact us at the Media Research Center contact form, and help us hold Big Tech accountable.