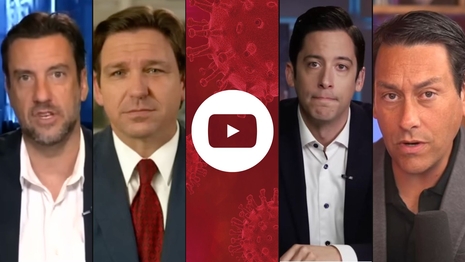 Florida Governor Ron DeSantis’s Press Secretary Bryan Griffin commented on YouTube’s COVID-19 misinformation policy changes. “Those naysayers may want to do this as quietly as possible to avoid admitting their errors,” he told MRC Free Speech America. “But the public sees and knows the truth.”

The governor’s press secretary talked about the stark contrast between YouTube’s policies and Gov. DeSantis’s approach to public health discourse. He said YouTube’s change in rules can be attributed in part to DeSantis’s willingness to facilitate discussion. "Big tech’s censorship was harmful to public health,” said Griffin. “Florida’s efforts to insist on open debate and to push back against censorship have no doubt brought us to this day when YouTube has begun to walk back its harmful policies formally."

At the time the governor said in a press release that YouTube’s decision “is just another example of unabashed overreach and bias by Big Tech.” He added that “Silicon Valley and the corporate media have drawn a line in the sand: they don’t care about the facts. They only care about pushing their agenda and will do so by whatever means necessary; the truth be damned.”

Other users online also took YouTube to task for the dubious timing of its COVID-19 “misinformation” policy changes.

The Daily Wire tweeted out a clip of The Michael Knowles Show. Knowles said the platform censored his show multiple times for so-called COVID-19 misinformation, and he pointed out the strange timing of the changes in relation to Dr. Fauci’s recently announced resignation. “Now, just one day after Dr. Fauci announced his accelerated retirement before Republicans retake the Congress, now all of a sudden, it appears Google has dropped its rules on mask commentary. Kind of coincidental timing,” Knowles said.

Outkick’s Travis similarly pointed out YouTube’s sudden change in tune. “After two years of banning anyone who said masks didn’t stop covid, YouTube has reversed its ban and now will allow masks to be questioned. Science!” he tweeted.

Podcast host Morris also called into question YouTube’s timing, suggesting the platform changed its policy at the same time the left began pivoting to blame former President Donald Trump for rolling out “unsafe vaccines” to combat the pandemic. “Interesting that these new YouTube guidelines come out as Democrats are starting to slam Trump over rushing these unsafe vaccines to market,” he tweeted. “It's almost like Google has friends in D.C. or something.”

Conservatives are under attack. Contact YouTube here and demand that Big Tech be held to account to mirror the First Amendment while providing transparency and an equal footing for conservatives. If you have been censored, contact us using CensorTrack’s contact form, and help us hold Big Tech accountable.