YouTube appeared to remove Senator Rand Paul’s (R-KY) video protesting the platform’s censorship and reportedly suspended him for seven days. “Apparently, because I dared to contradict Dr. Fauci and the government YouTube removed my video,” Paul commented in his response. 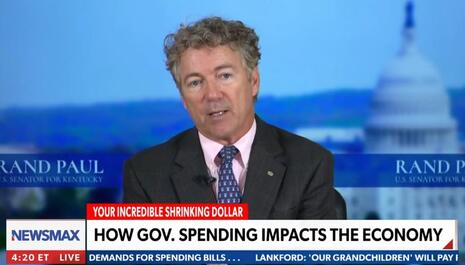 Paul created a video in response to YouTube’s reported removal of an interview he did with Newsmax where he discussed masking and National Institute of Allergy and Infectious Diseases  Director Dr. Anthony Fauci’s handling of the COVID-19 pandemic. Paul criticized YouTube censorship in his response video calling it “very dangerous.” He added:“[I]t stifles debate and promotes groupthink where the truth is defined by people with a political agenda.” Paul later called the incident as a “badge of honor” in a tweet and said that the platform not only removed the second video but also suspended his channel for seven days.

The senator told viewers the reasons YouTube purportedly gave for removing the Newsmax interview. “YouTube said the video violated their policy because of my comments on masks and that they don't allow videos that contradict the government's guidance on COVID,” he said. Paul is likely referring to the platform’s “COVID-19 medical misinformation policy,” which forbids content that “contradicts local health authorities’ or the World Health Organization’s (WHO) medical information about COVID-19.” Rather than retreat from his comments, Paul doubled down citing studies he said show that cloth masks are ineffective.

He also expressed his concerns about Big Tech’s growing power. “YouTube may be a private entity, but they're acting like an arm of the government censoring those who present an alternative view to the science deniers in Washington,” he said in the video.

Just the News reported that Paul has said that he does not advocate for breaking up Big Tech companies, but questioned whether they can still be considered private entities. "[I]f they are taking government edicts and then enforcing them, are they a private entity any longer or are they becoming an organ of the government? I think it's terrible for free speech," the senator reportedly said.

YouTube has a history of censoring politicians for spreading so-called “misinformation.” The platform reportedly censored a video of Senator Ron Johnson (R-WI) and suspended his account for seven days for posting a speech in which he suggested hydroxychloroquine and Ivermectin as possible treatments for COVID-19. YouTube has also censored multiple speeches and interviews of former President Donald Trump even after it banned him from the platform following the Jan. 6 capitol riots.

YouTube did not respond to MRC Free Speech America’s request for comment at the time of publication.