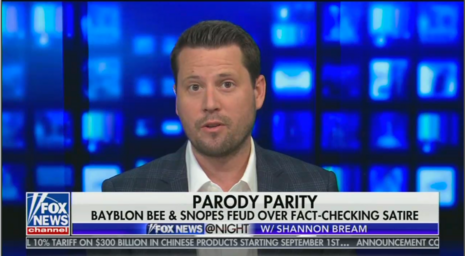 Babylon Bee has an established history as a popular satirical website, and Dillon said the company was considering serious action: "We are contemplating and discussing with our counsel what the next move should be. Should we sue them or not? And that's an open question." Dillon suggested that the “misinformation” label could pose a serious threat to his website. “They put this stuff out there and if they can get it to stick, then then we have no platform remaining,” he said. “There's not going to be anybody who wants to host our stuff. ... It’s an effort to try and cancel us."

Dillon also claimed that liberals question whether The Babylon Bee’s content qualifies as satire: "These liberal media outlets and personalities have tried to create this narrative about us where we're not actually a satire site, but a disinformation site and where we're putting out fake news on purpose to mislead people.”

His decisive remarks were in response to a New York Times article published last month. The original version of The Times’s story alleged that The Babylon Bee “trafficked in misinformation under the guise of satire.” According to The Times, satire was simply an excuse for The Babylon Bee to “protect their presence” on Facebook.

Dillon suggested The Times’s accusation against his satirical site was hypocritical. "They're using misinformation to smear us as being a source of misinformation," he said. "They are, in fact, the ones trafficking in misinformation under the guise of journalism."

The Times later edited the article. The newspaper removed the words “trafficked” and “under the guise of satire.” However, even the edited version of the story left open for debate “whether the [The Babylon Bee] published misinformation or satire.”

The New York Times is not the first organization to question The Babylon Bee for allegedly not making its satirical identity obvious enough. In a public history page known as a “Talk” page on Wikipedia, editors with anonymous tags or usernames discussed in February whether or not the conservative satire site could “legally be considered ‘satire’?”  Facebook recently demonetized a Babylon Bee graphic entitled “RIOTING SAFELY” because the post purportedly went against its community standards on "coordinating harm and promoting crime.” Facebook has since restored the post.

Conservatives are under attack. Contact Facebook via phone at (650) 308-7300 or (650) 543-4800 and demand that Big Tech be held to account to mirror the First Amendment. If you have been censored, contact us at the Media Research Center contact form, and help us hold Big Tech accountable.