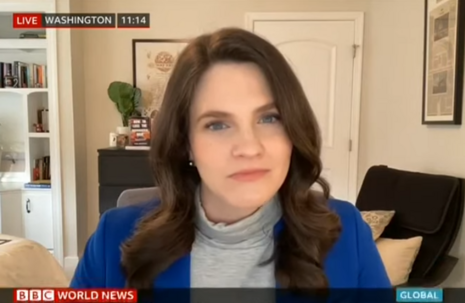 In a newly-surfaced video, Nina Jankowicz, the woman chosen by President Joe Biden to run DHS’s new Disinformation Governance Board, appears to suggest that others’ tweets should be edited by “verified” Twitter users – but, only by those she deems “legit.”

"So verified people can essentially start to edit Twitter, the same sort of way that Wikipedia is so they can add context to certain tweets," Jankowicz says in the video, published in an article by The Post Millennial on Wednesday:

“Biden's new ‘Minister of Truth’ Nina Jankowicz addressed a panel on a Zoom call about the benefits of editing other people's tweets in a newly surfaced video.”

Twitter should be policed in a manner similar to the heavily-left-leaning Wikipedia platform, but not all “verified” Twitter accounts are worthy of being editors, Jankowicz says. As The Post Millennial explains:

“In what appears to be a conversation about Twitter's Birdwatch feature, which was eligible for Twitter verified users, Jankowicz laments that ‘there are a lot of people who shouldn't be verified, who aren't, you know, legit, in my opinion. I mean, they are real people, but they're not trustworthy,’ she told those on the call.”

Both Jankowicz and the new Disinformation Governance Board have come under fire from free-speech advocates, who say it is an Orwellian attempt to silence speech that disagrees with government-sanctioned ideology.

“The Administration that activated the FBI against parents at school board meetings now has created a government Disinformation Board to monitor all Americans’ speech. It’s a disgrace. Joe Biden & Secretary Mayorkas: dissolve this monstrosity immediately,” Sen. Josh Hawley (R-Mo.) said in a tweet reacting to the announcement of the new board.

“This new board is almost certainly unconstitutional and should be dissolved immediately,” Sen. Hawley says in a letter to DHS Sec. Alejandro Mayorkas.

Jankowicz has been criticized for disseminating disinformation herself on social media in past posts, such as when she appeared to claim the Hunter Biden laptop was fake news.