The president’s Twitter account and the account for his campaign, @TeamTrump, have been censored, suppressed, and limited 486 times since May 31, 2018. Since Dec. 7, both accounts have received 50 more labels, and in some cases, a new form of censorship. Former Vice President Joe Biden and his campaign, @TeamJoe, have not been censored at all. 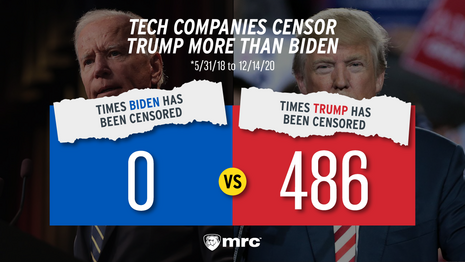 Some tweets from Trump’s Twitter were completely disabled on Dec. 12, according to Business Insider. Users were not able to like, retweet, quote tweet, or comment on these tweets. A label on one tweet reportedly said, “We try to prevent a Tweet like this that otherwise breaks the Twitter Rules from reaching more people, so we've disabled most of the ways to engage with it.” Twitter removed this label and the harsher censorship a few hours later, but left another label in its stead: “This claim about election fraud is disputed.”

But don’t be fooled by the mild-mannered term “context,” which Twitter likes to use as the reason for the labels. Labels indicate censorship. Even the platform has admitted that the company “de-amplified” labeled tweets.

Media and tech figures alike are eager and pushing for the day Twitter finally bans Trump. For tech media figures like podcast host Kara Swisher, that day can’t come soon enough. “But I am here to tell you that the president’s tenure as troll in chief is at an ignominious end. Mr. Trump’s magic social media wand will soon be powerless,” Swisher wrote in a commentary for The New York Times on Nov. 17.

The double standard employed by Twitter also seems to have let Chinese accounts get away with promoting seemingly false propaganda while the company has slapped endless labels on Trump tweets. Sen. Marco Rubio (R-FL) aptly pointed out that the communist Chinese, via the official Chinese Embassy Twitter account, seem to have been able to say whatever they want, despite reports to the contrary.

Conservatives are under attack. Contact Twitter by its official (415) 222-9670,  Facebook, Twitter or mail to 1355 Market Street Suite 900 and demand that Big Tech be held to account to mirror the First Amendment while providing transparency, clarity on “hate speech” and equal footing for conservatives. If you have been censored, contact us at the Media Research Center contact form, and help us hold Big Tech accountable.