Facebook Shuts Down Page for Largest ‘Back the Blue’ Rally

Events supporting Black Lives Matter are allowed to stay up on Facebook. But not events that support the police force. 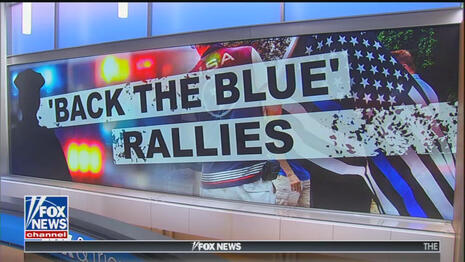 According to Law Enforcement Today national spokesperson Kyle Reyes, the page for the Long Island “Back the Blue” rally scheduled to take place on July 25 was taken down on Facebook. “We had more than 6,300 people who had already RSVP’ed to the event on Facebook. And as of last night, Facebook took down the page with no explanation,” he said on the July 24 episode of Fox and Friends First.

Reyes told Fox News correspondent Todd Piro, “Now we know that Facebook has taken down the pages of other rallies and events over the last six months. We just didn’t expect it to happen with the Back the Blue event.”

Reyes said in the interview that he was “expecting upwards of 10,000 people. It’s going to be one heck of a turnout.”

Facebook has a way of removing the protests and rallies that are important to conservatives, but not to liberals. In the past, the protest pages over the shutdowns and COVID-19 restrictions were removed from Facebook as well. “Events that defy government's guidance on social distancing aren't allowed on Facebook,” a Facebook spokesperson told the BBC. However, antifa groups like Smash Racism D.C. were allowed to break the D.C. curfew and riot in the streets while promoting it on Facebook.

All Out DC, another Antifa group, posted, “We have received word of a second protest at the White House Tonight at 5. Be prepared, stay safe, and bring a buddy!” The page for Black Lives Matter DC posted, “We reject DCs attempts to criminalize protesters and the notion of a peaceful protest.”

Previously, 119 violent Antifa groups were allowed to stay on Facebook. These groups had collected 351,948 followers. Smash Racism DC was the group that terrorized Fox News host Tucker Carlson’s home. The group “cracked the front door,” according to CNN.