The authors of the Social Science Research Council study found that there was “a social media narrative of manufactured outrage that was disproportionately Islamophobic, xenophobic, racist, and misogynistic.” It alleged that most of this outrage was either “amplified” or “originated” from outlets like OANN, PJ Media, Daily Caller, Breitbart, Powerline blog, and “hate groups” identified by the Southern Poverty Law Center (SPLC), such as ACT for America and the American Freedom Law Center. 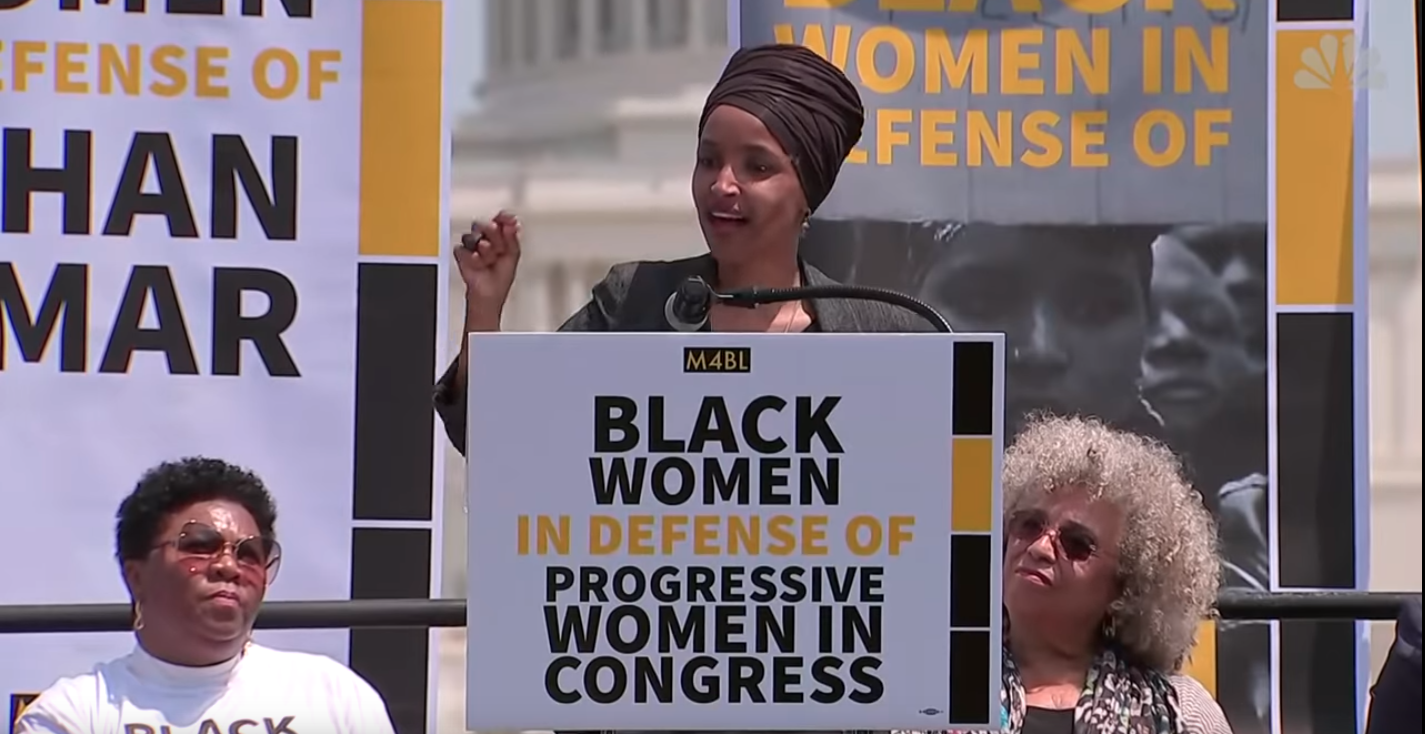 The study analyzed “1,600 terms” that were related to hate speech and found that 67 percent of tweets mentioning Omar had these terms. It also tried to show that conservative news outlets were obsessed with Omar and Rep. Rashida Tlaib (D-MI). But a graph showed that “Mainstream National” media focused on Omar and Tlaib 15 times more than conservative media.

Omar received the bulk of the outrage. The study asserted that “67 percent of tweets tagging Omar” contained some form of “hate speech.” This narrative was crafted and “heavily influenced” by “agents provocateurs,” and then amplified by conservative sites and figures. “They spread hate speech like a virus” on social media, said the study. 10 percent of the tweets marked as part of Omar’s network were labeled “Israel-related hate speech.” But these were not defined.

Notably, 11 percent of the accounts studied were “suspended” on Twitter for hate speech violations.

According to The Washington Post, Omar herself reviewed the study and called it “a wake-up call.” She complained, “It has become clear that these platforms do not take seriously their role providing a platform for white nationalist hate and dangerous misinformation in this country.”

The study compiled a database of 1,600 terms “associated with hate speech” that were run on the site Hatebase.org. These terms were not listed in the study, and when the Media Research Center reached out to the Social Science Research Council, there was no response.

Accounts with handles such as “@Shariafighter” were labelled as “anti-Muslim” based on the handle alone, even though fighting Sharia is not necessarily an anti-Muslim sentiment.

“Two organizations labeled as hate groups” by the SPLC had worked to introduce “anti-sharia bills” across the country. The link described the efforts of ACT for America and the American Freedom Law Center to pass laws, but never bothered to describe what these laws were.

Conservative sites and figures were accused of spreading “disinformation,” “misinformation,” and “malinformation” that all formed a “Information Disorder” about Omar and Rep. Rashida Tlaib (D-MI). It started with Powerline, which “claimed without evidence that Omar’s previous husband. . . was actually her brother.”

Some of the stories that followed, including one published in PJ Media, “included copies of divorece documents and screen grabs of pictures on social media, but none of the ‘evidence’ proved Omar’s first husband was her brother.” The study reminded readers that PJ Media was rated by Media Bias/Fact-Check as “right-wing” and “borderline ‘Questionable’ based on numerous failed fact checks.”

The concept that Omar opposed female genital mutilation (FGM) was created by the Clarion Project, according to the study. “It is designated by the Southern Poverty Law Center as an anti-Muslim hate group,” asserted the authors. However, even liberal sites like The Atlantic have stated that Omar “failed” to address the issue of FGM in a fitting fashion.

The study also focused on “Queen of Trolls” Laura Loomer, whom it referred to as “the most influential anti-Muslim voice in Ilham Omar’s network.” Loomer was identified as someone who worked for Project Veritas, smeared as “a conservative organization that secretly records liberal figures to entrap them.”

Even though local Minnesota papers like the Star Tribune have also reported on Omar’s “marriage history” and noted that the representative declined to comment on “lingering questions,” the study chided those that believed the story. “It is important that news organizations do not allow themselves to be used in the spread of misinformation and innuendo,” it said.

The Social Science Research Council has influential liberal tech executives on its board of directors, including Danah Boyd, the founder of Data and Society. The council has partnered with Facebook.

In an op-ed written for The New York Times, the authors of the study claimed that “trolls control the narrative on Twitter, at no cost.” They called on the platform to do something about these trolls, saying that Twitter should “take responsibility and systematically enforce its own standards.”

Albright told the Post that the hate speech “wouldn’t exist if somebody had built a platform like this to amplify them.”

The study was also funded by the Institute of International Education and the Association for Education in Journalism and Mass Communication.