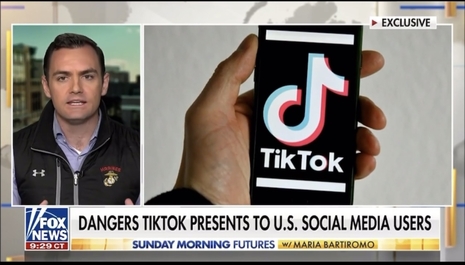 Congressman Mike Gallagher (R-WI) warned that Chinese-owned social media app TikTok is as addictive and dangerous as “fentanyl” for children.

The fentanyl epidemic in America claims lives every day. But Gallagher says that TikTok is the digital equivalent of the highly addictive drug. The representative went on the Fox News Channel’s Sunday Morning Futures with Maria Bartiromo and discussed the dangers of TikTok.

“TikTok should be banned,” Gallagher said bluntly, adding that he and Senator Marco Rubio (R-FL) have legislation to ban the app. Gallagher added, “TikTok is digital fentanyl addicting our kids, and just like actual fentanyl, it ultimately goes back to the Chinese Communist Party.”

The congressman noted that TikTok is owned by ByteDance, a company in which the Chinese Communist Party both owns a financial stake and maintains a board seat. “That means the CCP can track your location, it can track your keystrokes, it can censor your news,” Gallagher said. “Why would we give our foremost adversary that amount of power?”

Gallagher said TikTok is using the “swamp” in Washington, D.C. to its advantage. “They're hiring an army of lobbyists, including former congressmen, senators, 31 former high-level congressional staffers in order to do their bidding,” he stated. “No paycheck is worth that…we need to ban TikTok.”

Gallagher is one of many lawmakers and experts concerned about TikTok’s popularity in America in light of recent revelations that TikTok data is accessible to Chinese ByteDance employees.

Conservatives are under attack. Contact TikTok via email at communitymanager@tiktok.com and demand Big Tech be held to account to mirror the First Amendment and provide transparency. If you have been censored, contact us at the Media Research Center contact form, and help us hold Big Tech accountable.