House Republicans Propose to Stop CCP Officials from Being on U.S. Social Media 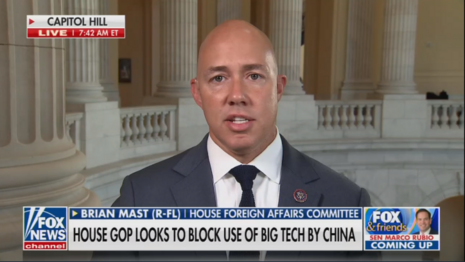 The “China Social Media Reciprocity Act” would prevent certain officials and “entities” of the genocidal Chinese Communist Party (CCP) from being on Big Tech platforms. The new GOP legislation takes aim at the multiple Chinese officials and state media outlets currently on Facebook and Twitter.

“Chinese officials should not be allowed to spew propaganda on U.S.-based social media sites while actively blocking the free flow of ideas on their own sites,” Rep. Brian Mast (R-FL) told Fox News.

Mast introduced the bill, which is co-sponsored by Reps. Jim Banks (R-IN), Thomas Tiffany (R-WI) and Joe Wilson (R-SC). The bill would apply to all American-owned social media companies, according to Fox News.

Banks noted the “staggering amount of hypocrisy” associated with the CCP’s social media use. “China bans its own citizens from using Twitter and Facebook, but Chinese Communist Party officials still use those platforms to push their propaganda abroad,” Banks told Fox News.

Banks also called out the hypocrisy of American social media companies that censor conservative U.S. officials but ignore the propaganda of dictatorial regimes and leaders.

“Freedom always wins over tyranny, and the Chinese Communist Party knows it. That’s why they’ve taken drastic steps to keep American ideas off of their social platforms," Fox News quoted Mast as saying. "This bill is about leveling the playing field."

Mast added, "Chinese officials should not be allowed to spew propaganda on U.S.-based social media sites while actively blocking the free flow of ideas on their own sites.”

The bill would provide an exception to the ban “with respect to an individual or entity if the President certifies to the appropriate congressional committees that the Government of the People’s Republic of China … [has] verifiably removed prohibitions on officials of the United States Government from accessing, using, or participating in [Chinese] social media platforms,” according to the bill text.