Google sponsored a disturbing LGBTQ+ “Pride” and drag event in Austin, Texas, which was billed as “family-friendly,” according to the Rainbow on the Creek web page.

The “Rainbow on the Creek” event in Austin’s Waterloo Park said on its official webpage that it is “a free family-friendly celebration that connects, educates, and celebrates Austin’s lesbian, gay, bisexual, transgender, and queer (LGBTQIA+) community.” The webpage also prominently announced that the event was “[s]ponsored by Google.”

Performers at the event June 11 included multiple drag queens, including “Pelvis Wrestley” and “Roxxxy Andrews of RuPaul’s Drag Race” as a featured performer, according to the event page. A self-described independent journalist claimed that scantily-clad drag performer “Heyonce The Vocalist” was caught on video performing suggestive dance moves at the event while children watched. 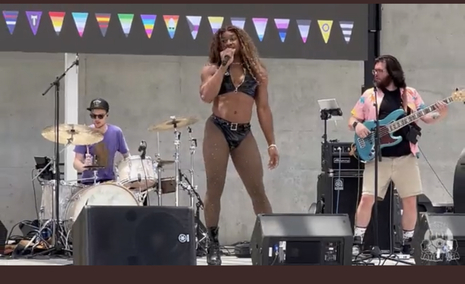 Other parts of the event included the Austin Drag Queen Showcase, “Hosted by Vylette Ward & Jezebel” and Drag Queen Storytime, “Presented in partnership with Austin Public Library.” The event website described these various performances as “activities for the whole family.” The event webpage unironically warned its visitors to “drink plenty of water” and stay cool, but did not warn about perverted, sexualized events being presented to kids.

Besides Google, other sponsors of the event included Tito’s Handmade Vodka, Vivent Health and Univision Austin, according to the event page.

This sadly is only one of multiple recent drag performances allegedly for families. A Dallas “gay bar” recently hosted a drag show for kids literally titled “Drag the Kids to Pride.” LGBTQ+ activists reportedly claim that little kids “need” drag queen and other Pride Month events and gender talks, according to The Washington Times. Schools, libraries and even Taco Bell have supported “family-friendly” drag queen brunches, The Times said.

Google also has a history of pandering to radical LGBTQ+ ideology and censoring those who criticize it. For instance, Google CEO Sundar Pichai wrote a letter in 2019 pandering to his “gay” employees, aka “Gayglers” instead of “Googlers,” calling them a “source of pride” for the company. Also in 2019, Google-owned YouTube deplatformed a teenage girl after she criticized Pride Month in a video.

Conservatives are under attack. Contact Google at 650-253-000 and demand it mirror the First Amendment while providing transparency, clarity on hate speech and equal footing for conservatives. If you have been censored, contact us at the Media Research Center contact form, and help us hold Big Tech accountable.