Obama Calls for ‘Modifications’ to Online Anonymity, Says Misinfo Can Be ‘Fatal’ 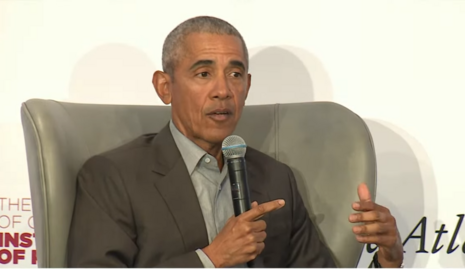 “I am close to a First Amendment absolutist,” former President Barack Obama said last week, even as he called misinformation potentially “fatal” and suggested “modifications” to online anonymity.

The Atlantic Editor-in-Chief Jeffrey Goldberg interviewed Obama at his left-wing mag's “Disinformation and Erosion of Democracy” conference. Obama more than once used seemingly pro-free-speech language during the event hosted by The University of Chicago’s law school.

“I believe in the idea of not just free speech, but also that you deal with bad speech with good speech,” he said. Obama added, however, that disinformation, or the “systematic effort to either [sic] promote false information [or] to suppress true information for the purpose of political gain, financial gain, enhancing power, suppressing others, targeting those you don’t like,” is a threat.

Obama added that “editorial choices…combined with any kind of ethno-nationalism or misogyny or racism can be fatal,” noting further “that is the media ecosystem that we now are occupying.”

Obama’s comment on anonymity was particularly relevant. “In some circumstances, it’s important to preserve anonymity, in terms of–so that there’s space in repressive societies to discuss issues,” he said. ”But as we’ve all learned, it’s a lot harder to be rude, obnoxious, cruel, uh—or lie when somebody knows you’re lying and knows who you are, and I think that there may be modifications there that can be made.”

There have been many recent attacks on online anonymity. The hacked private information of donors to the anti-COVID-19 mandate Freedom Convoy was spread across the internet. The Canadian government then froze some Freedom Convoy-connected cryptocurrency wallets.

Cryptocurrency is popular because it is largely unregulated and provides a high degree of anonymity, but that may change. President Joe Biden signed an executive order in March aimed at regulating crypto and at creating “a U.S. Central Bank Digital Currency.” The World Economic Forum called for a “globally coordinated approach” to crypto regulation soon after.

“Most people think that digital money is crypto, and private, but what I see are superpowers introducing digital currency,” said economist and former White House consultant Pippa Malmgren during the 2022 World Government Summit. "The Chinese were the first, the U.S. is on the brink.”

Obama said in his interview he has hope that people’s opinions can be easily changed. “I think we underestimate the degree of pliability in our opinions,” Obama said. “If people are given different information, they can process differently.”

That sounds like what Big Tech and Big Media did before the 2020 election. Both restricted information unfavorable to then-Democrat presidential candidate Joe Biden in a way that the Media Research Center found to have changed the election results.

Obama specifically mentioned the Left’s favorite bludgeon, the events at the Capitol on Jan. 6, 2021, as an example of the necessity apparently to allow Big Tech companies the power to suppress so-called “misinformation.” He said that, looking at Twitter’s, Facebook’s, and YouTube’s response to Jan. 6, it “tells me that they at least appear to have some insight into what’s more likely to prompt insurrectionists’, white supremacists,’ you know, misogynists’, uh–behavior on the internet, bullying behavior.”

Conservatives are under attack. Contact your representatives and demand they hold Big Tech to account to provide an equal footing for conservatives. If you have been censored, contact us using CensorTrack’s contact form, and help us hold Big Tech accountable.