Tuesday on SiriusXM Innovative tech entrepreneur David Sacks told Megyn Kelly during her show that “Silicon Valley turned its back on a lot of the principles that it was founded with, in terms of a free and open internet.” Now the very tech platforms that defined themselves as democratic have turned to “policing” and censoring users, he said. 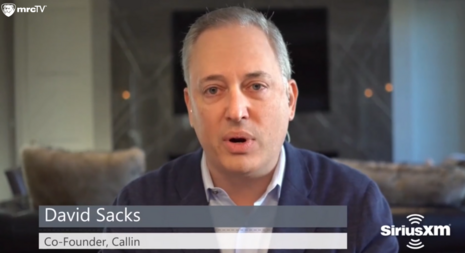 Fox News’ Megyn Kelly interviewed Sacks, co-founder of Craft Ventures and co-founder of the Callin podcasting app, on The Megyn Kelly Show. Sacks was one of what Kelly called the “PayPal Mafia,” a group of talented tech entrepreneurs who originally worked together to create PayPal, including Founders Fund managing director Peter Thiel and Tesla co-founder Elon Musk.

They also talked about Big Tech, censorship, the Trump effect, and how wokeism took over the tech sphere.

Sacks highlighted Big Tech’s threat to free speech. “You’ve seen so much censorship over the past two years,” he said. “[W]e’ve seen over and over again, that what starts as ‘misinformation’ ends up being recognized as the truth.” He used the COVID-19 lab leak origin theory as an example. Sacks also explained how the First Amendment right to free speech is threatened now that the public square has moved online, and is controlled by a few “oligarchs.”

He continued, “The town square has essentially been digitized, centralized, and privatized in the hands of a handful of actors.” Sacks further emphasized how very distrusted the media are now, because of this situation. He referred to people commonly called “anti-vaxxers” by the left as “media skeptics,” people who do not trust what legacy media or Big Tech tells them. Former President Donald Trump catalyzed this sudden clash and clarity, Sacks indicated.

Then, as he noted, Trump shocked Big Tech.

“The turning point really was 2016,” Sacks said. “The American people sent a message to the establishment that Big Tech didn’t want to hear, that was a little bit too much populism and democracy for them, and so they really changed their view on free speech.” The very platforms that allegedly considered themselves democratic, like Facebook, suddenly reacted against a democratic movement.

Sacks talked about being a conservative, an outlier in college back when the culture wars were beginning in earnest. “In a way, everything that’s happening, I think, in our politics and culture today is downstream of the change that we saw, you know, thirty years ago on these college campuses,” Sacks said.

He explained that there is a sort of “mono-culture” of leftism in the tech world, and it has only gotten worse. Silicon Valley turned from a free, open internet to “policing language,” and Big Tech is partnered with the leftists, or “woke elite,” who have what Sacks calls a “professional class hegemony.”

Conservatives are under attack. Contact your representatives and demand they hold Big Tech to account to provide equal footing for conservatives. If you have been censored, contact us using CensorTrack’s contact form, and help us hold Big Tech accountable.