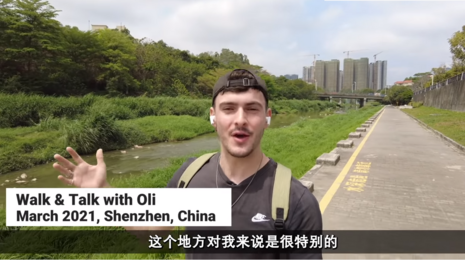 YouTube is not only censoring conservatives, but recently, it has reportedly become a platform for something perhaps just as sinister: Western influencers who paint positive pictures of Communist China, even repeating Chinese propaganda along the way.

Father and son Lee and Oli Barrett, for instance, “visit hotels in exotic locales” and “tour out-of-the-way villages,” according to The New York Times. That’s not all that the Barretts do, however. They, and other YouTube influencers, have defended the dictatorial Chinese Communist Party (CCP) and its handling of COVID-19 and denied its genocidal persecution of ethnic minorities.

“All the West are hoping to do is to destabilize the area of Xinjiang to stop the rise of China,” said the older Barrett in one video clip.

“Maybe it was America first to infect the world with coronavirus,” The Times quoted the JaYoe Nation as saying.

The New York Times stated that the troubling ties go deeper than Li, however. China’s government has reportedly paid YouTube creators and allowed them into areas restricted for ordinary journalists. China has even reportedly organized and funded travel for the content creators. The Times further reported that China can provide “lucrative traffic.” If this is true, and The Times cited YouTubers themselves, then YouTube may be one more channel through which the CCP is trying to attack the West; but with propaganda, not guns. The YouTubers may be sincere in admiring China, but China may still be targeting a wide Western audience.

Canadian YouTuber, who reportedly lives in China, Kirk Apesland acknowledged that sometimes he receives remuneration for what he does, in the form of “free hotels” or “fees,” comparing it to advertising for tourism. The Times reported that pro-CCP influencers insist China does not tell them what to say, but the very fact that the Chinese government seemingly funds these YouTubers is concerning enough on its own. Several YouTubers recently did a livestream with state-controlled China Radio International, The Times stated. Referring to a disappointing schedule change, YouTube influencer Matt Galat (the JaYoe Nation) stated in a since-removed clip, “They had to fit in more propaganda visits,” according to The Times. China also reportedly generates valuable traffic; for instance, by posting Gal-Or’s video on Xinjiang to Chinese embassy-affiliated social media accounts.

“‘China is the new super-abuser that has arrived in global social media,’ said Eric Liu, a former content moderator for Chinese social media. ‘The goal is not to win, but to cause chaos and suspicion until there is no real truth.’”