Apparently history is too dangerous to teach children. YouTube has censored a Young America’s Foundation (YAF) video about “Victims of Socialism,” restricting the video on the grounds that it is not “suitable” for kids. 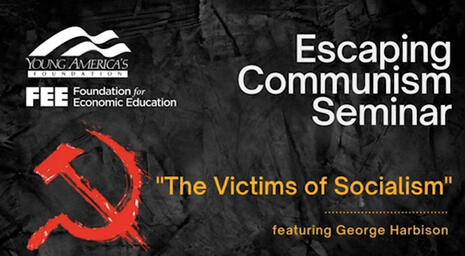 YAF said it was notified by YouTube that the “Victims of Socialism” lecture video “may not be suitable for viewers under the age of 18.” The lecture or talk by retired Unitek Information Services, Inc. Chief Financial Officer George Harbison is now age-restricted and bears a warning that “This video may be inappropriate for some users.”

Harbison warned in the talk about the rise of socialism’s popularity in America, speaking on socialism’s many tragic victims, “slain innocents,” to explain why Americans should be alarmed by the trend.

YAF spokeswoman Kara Zupkus told MRC Free Speech America that YAF is appealing YouTube’s restriction. “YouTube’s decision to restrict Young America’s Foundation’s educational video on the dangers of socialism is disturbing,” Zupkus said. “The point of such a powerful video is to awaken the next generation in ensuring that socialism never takes hold in America. High school students will now only be able to access politically correct, censored information that Big Tech deems ‘suitable.’ It is a sad day for free speech and for education in America.”

YouTube has a history of putting age restrictions on videos it dislikes. The preview for Fox News host Tucker Carlson’s documentary series “Patriot Purge” about the events of Jan. 6 recently received age restrictions and a warning that the content “may be inappropriate for some users.” Former ABC reporter John Stossel’s anti-socialism video was age-restricted in 2018 by YouTube.

Conservatives are under attack. Contact YouTube here and demand that Big Tech be held to account to mirror the First Amendment while providing equal footing for conservatives. If you have been censored, contact us using CensorTrack’s contact form, and help us hold Big Tech accountable.