Big Tech just can’t seem to get off the censorship train — especially when it comes to content that runs counter to the left’s accepted narrative. “You know, tyrants don’t like [satire]. It’s the thing that they hate more than anything else,” said satire site Babylon Bee CEO Seth Dillon.

Dillon appeared on Tucker Carlson’s show “Tucker Carlson Tonight” on Wednesday to discuss how Big Tech censorship is harming humor. Tucker called Babylon Bee “one of the few remaining amusing sites on the internet.” He added, “[O]f course Big Tech hates it and is trying to censor it.” Dillon told Tucker, “We’ve been fact-checked to death,” specifically citing a 2018 piece which jokingly described an “industrial-sized washing machine” CNN bought “to help its journalists and news anchors spin the news before publication.” 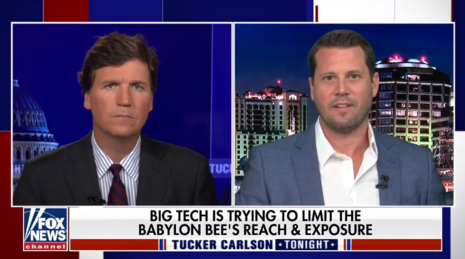 Dillon said social networks use “fact-checkers” under a pretense of controlling “misinformation.” “It’s politically motivated, has been the whole time,” Dillon stated. Big Tech censorship, starting with the 2020 election, created “a drastic drop in [Babylon Bee] traffic,” explained Dillon. “We used to derive most of our traffic through Facebook,” Dillon said, but no longer. Babylon Bee articles, formerly “crazy viral,” are now barely shared. The satire outlet CEO said one recent piece reached only 11 people. “We could have reached more people if we’d printed it out and nailed it to like, a telephone pole in a small town,” Dillon expressed his frustration.

“They want to control your speech and control what you joke about,” Dillon insisted. “I think it’s the most condescending thing ever.” Dillon indicated the rulemakers see certain people as “beneath” them and so protected from “hate speech.” Dillon said he doesn’t consider people beneath him and “reject[ed] the whole premise.” Big Tech, however, “perpetuate[s] those stereotypes by enforcing rules like this. And it’s really just aimed at curbing and silencing and ostracizing satire, comedy and thinkers that they don’t like,” Dillon said.

“If anybody is fighting the power, it’s The Babylon Bee,” Tucker agreed.

Facebook reportedly flagged the CNN satire Dillon mentioned as “misinformation” and Snopes fact-checked the piece. Snopes admitted it “should have been obvious” The Babylon Bee piece “was just a spoof.” Snopes writer David Mikkelson added subtle jabs at Christians and The Babylon Bee even in his retraction, however.