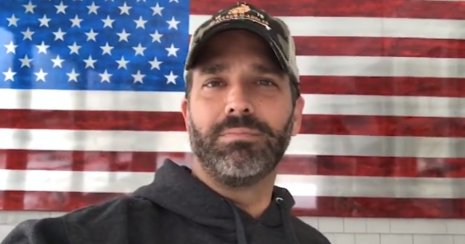 “It’s a platform that still believes in freedom of speech,” he said of his decision to use Rumble. “It’s not like so many of the other social platforms out there where, obviously, you know leadership is totally biased, where the algorithms only go one way, where they do whatever they can to possibly censor one side of the conversation, always against conservatives.”

The former president’s son announced that he would use the platform Rumble daily to call out the hypocrisy from Big Tech and others in the left-wing media. “I like being on a platform … where you can exercise your right to free speech and to ideas and let those ideas compete equally on a level playing field so the best idea wins,” he said. “I mean, that’s a founding tenet of America. It’s one of the founding principles that this incredible country was based on.”

Since his announcement video on Feb. 19, Don Jr. has published videos titled “These Teachers Unions Are Out of CONTROL,” “So Biden Just Got a HUGE Loss For His Presidency” and “Imagine If They Followed Their Own Rules.” His Rumble videos have received tens of thousands of views, and some have already surpassed 100,000.

Don Jr.’s move to Rumble should come as no surprise. Despite YouTube holding the position as the internet’s largest video platform, it has increasingly cracked down on conservative content in recent months. The platform suspended then-President Donald Trump’s channel on Jan. 12.

YouTube followed this move by banning the pro-life organization LifeSiteNews earlier in February. The Epoch Times even reported Feb. 20 that YouTube removed a Newsmax interview with the former president. A Google spokesperson explained that YouTube removed the video in accordance with the platform’s “presidential election integrity policy.”

Trump has publicly floated the idea of building his own platform to combat Big Tech censorship. “We’re negotiating with a number of people,” Trump said in a Newsmax TV clip posted Feb. 17. “There’s also the option of building your own site because we have more people than anybody, so you can literally build your own site.”

However, his son appears to have already made his move to alternative platforms with his recent shift to Rumble.