UPDATE: This story has been updated to reflect that Frances Haugen was one of the State of the Union guests for First Lady Jill Biden. 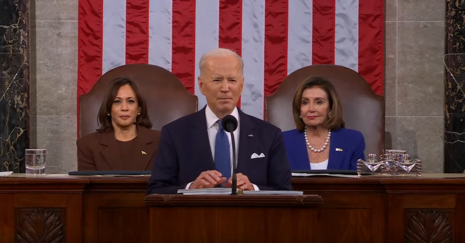 Rubio called on Biden to ban the Chinese Communist Party-affiliated TikTok in the U.S. in a tweet following the speech, in which Biden called for Big Tech to stop profiting off of children’s data and marketing to kids. 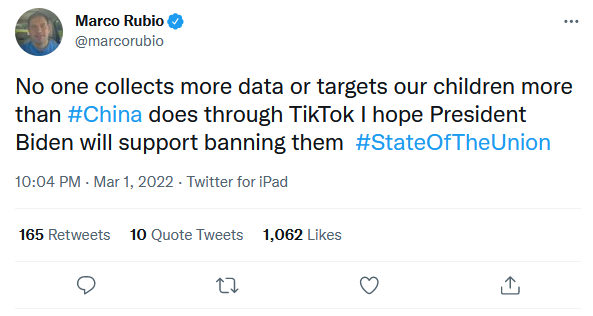 McMorris Rodgers, the ranking member of the House Energy and Commerce Committee, on Tuesday also pushed for Biden and congressional Democrats to engage more closely with Republicans to protect children’s privacy, and welcomed Biden’s focus on the matter during the State of the Union.

“Protecting kids online starts by establishing a national privacy and data security framework and enacting legislation that stops Big Tech’s harmful abuse of power,” she said in a statement. “I welcome President Biden joining our call and urge my Democratic committee colleagues to stop dragging their feet and prioritize comprehensive privacy legislation and addressing Big Tech’s harm on kids.”

In addition to challenging social media companies, Biden in his speech praised the “courage” of Facebook “whistleblower” Frances Haugen, apparently for leaking company documents to the media.

“As Frances Haugen, who is here tonight with us, has shown, we must hold social media platforms accountable for the national experiment they’re conducting on our children for profit,” Biden said as Haugen smiled and clapped approvingly from loft seating. “Thank you for the courage you showed.”

Haugen was one of First Lady Jill Biden's guests at the speech.

Sens. Richard Blumenthal (D-CT) and Marsha Blackburn (R-TN) introduced the Kids Online Safety Act of 2022 in February. The bill would require tech platforms to give “academic researchers and non-profit organizations” access to “critical” social media data on a yearly basis pertaining to potential risks that the platforms have on minors, according to a summary of the legislation.

Platforms would also have to allow parents and minors to opt out of algorithms that might propagate content about self-harm, suicide, eating disorders, sexual abuse, and substance abuse, according to a Lexology analysis of the bill.

“Threats of liability may force platforms to scan users’ communications and take away tools for encrypting communications, meaning Americans will have less protection against privacy intrusions from industry and government alike,” AAF Technology and Innovation Policy Director Jeffrey Westling wrote in a Feb. 23 blog post.

The bill would direct tech companies to scan user communications in suspected instances of child exploitation. This would essentially give companies similar authorities as state governments in investigating child exploitation, which could make any company-obtained evidence inadmissible in court. Under the Fourth Amendment, such evidence can’t be prosecuted, meaning pedophiles could get off scot free, according to Westling.