Unsurprisingly, the liberal media are keeping quiet after several major news outlets fell for an unbelievable hoax. And Big Tech continued to spread it. 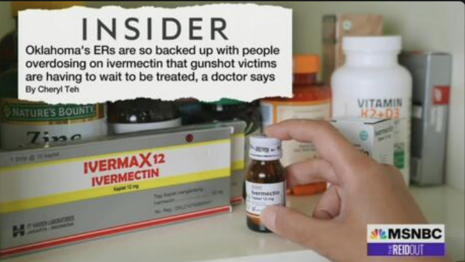 There was only one problem: the story was completely false.

The story included quotes from Dr. Jason McElyea that painted a bleak picture of the capacity of hospitals.

“The ERs are so backed up that gunshot victims were having hard times getting to facilities where they can get definitive care and be treated,” said McElyea.

“The scariest one that I’ve heard of and seen is people coming in with vision loss,” he added.

Although Dr. Jason McElyea is not an employee of NHS Sequoyah, he is affiliated with a medical staffing group that provides coverage for our emergency room. With that said, Dr. McElyea has not worked at our Sallisaw location in over 2 months. NHS Sequoyah has not treated any patients due to complications related to taking ivermectin. This includes not treating any patients for ivermectin overdose. All patients who have visited our emergency room have received medical attention as appropriate. Our hospital has not had to turn away any patients seeking emergency care. We want to reassure our community that our staff is working hard to provide quality healthcare to all patients. We appreciate the opportunity to clarify this issue and as always, we value our community’s support.

Even the photograph attached to the story was misused, from a vaccine clinic in January where the individuals present wore coats.

The story was picked up by The Independent, The Guardian, and The Insider. The story was promoted in a tweet by MSNBC’s Rachel Maddow, MSNBC contributor Dr. Jason Johnson, and Shannon Watts of Moms Demand Action.

Dr. Johnson even went so far as to bizarrely accuse Senator Jim Inhofe (R-OK) of somehow profiting off an event that never actually happened.

MSNBC’s Kyle Griffin admitted he was wrong for sharing the story, tweeting that “the man at the center” of the piece was “lying.” But where were the famous fact-checkers attaching warnings to the tweets? They were nowhere to be found.

For its part, Rolling Stone still has the story on its Facebook and Twitter accounts for now, although the magazine tweeted in a follow-up tweet that “[o]ne hospital is denying an Oklahoma doctor's claim that ERs are delaying care for gunshot victims due to overdoses of ivermectin, a drug being falsely peddled as a covid treatment.”