Christina Pushaw is back on Twitter after a twelve-hour suspension -- and she's ready to set the record straight about Big Tech. 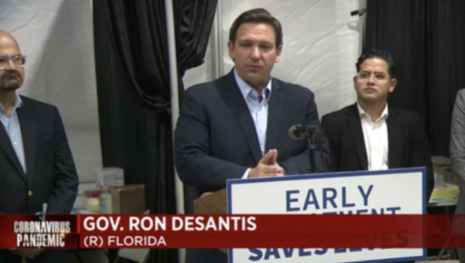 Governor DeSantis’s press secretary was suspended from Twitter Friday night after the Associated Press sent DeSantis a letter asking him to fire her. The Associated Press complained after Pushaw pushed back against a reporter’s attacks directed DeSantis and the Covid treatment Regeneron, accusing her of creating an “online mob” to attack the press.

Pushaw said the AP was just trying to distract from its “hit piece” on DeSantis.

"No one from our office ever threatened him," Pushaw said, referring to the reporter. "His story drew harsh criticism because it was false -- and discouraged people from seeking life-saving treatment. Instead of owning up to that and retracting their hit piece, AP doubled down and tried to make the story about the backlash the reporter received."

“Twitter confirmed to Fox News that DeSantis Press Secretary @ChristinaPushaw's account "has been locked for 12 hours for violating the Twitter Rules on abusive behavior" amid the dustup w/ the AP. When asked what specific tweets violated the rules, Twitter declined to comment,” tweeted FoxNews.com media reporter Joseph Wulfsohn

For her part, Pushaw is not backing down.

“Twitter suspended me after AP complained about pushback to their debunked hit piece about @GovRonDeSantis. This only proves Governor DeSantis right — again. Those who challenge false narratives are too often silenced by corporate media and Big Tech collusion,” Pushaw tweeted after her account was reinstated.

She also thanked users for their backing.

“Thank you to everyone for your support,” she tweeted. “If Big Tech won’t allow the media activists themselves to be held accountable for spreading disinformation about @GovRonDeSantis, at least we can still expose and debunk the misleading narratives they push.”

She later followed up with a tweet saying that Big Tech is “afraid” of Governor DeSantis.

“Friendly reminder: The corporate media propagandists and Big Tech censors are afraid of @GovRonDeSantis,” she said.