Congressional Democrats have accused social media app Nextdoor of not doing enough to eliminate misinformation about the COVID vaccine. 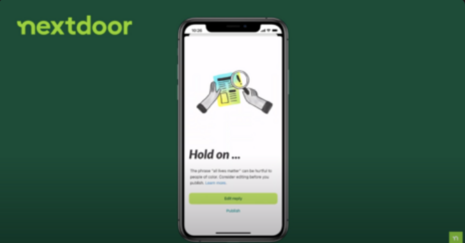 The news comes after prominent Democrats, particularly President Biden, targeted Facebook and YouTube after alleging the platforms did not do enough to block misinformation about the vaccine.

Biden accused Facebook of “killing people” because the platform was not censoring misinformation.

Facebook subsequently slammed the president’s comments and released its own statement.

“We will not be distracted by accusations which aren’t supported by the facts,” Facebook said.

“The fact is that more than 2 billion people have viewed authoritative information about COVID-19 and vaccines on Facebook, which is more than any other place on the internet.”

“More than 3.3 million Americans have also used our vaccine finder tool to find out where and how to get a vaccine. The facts show that Facebook is helping save lives. Period.”

Ironically, Nextdoor previously caved to the speech police when it implemented a new policy that encouraged users to avoid content that “could be offensive.”

“The anti-racism notification does not prevent a neighbor from publishing, but aims to make people aware of language that may violate our policy against discrimination and the harm that can be caused by the use of these phrases,” Nextdoor said in a company blog. “As a reminder, All Lives Matter and Blue Lives Matter content is explicitly prohibited on Nextdoor when used to undermine racial equality or the Black Lives Matter movement.”

“We made this change in light of our ongoing anti-racism work to make Nextdoor a platform where everyone belongs. Since 2015, we have partnered with racial justice experts to ensure that Nextdoor is a welcoming environment for all neighbors,” Nextdoor continued.

Conservatism is under attack. Contact Nextdoor headquarters via this link and demand that provide equal footing for conservatives. If you have noticed bias from Nextdoor’s moderation, contact us at the Media Research Center contact form, and help us hold Big Tech accountable.