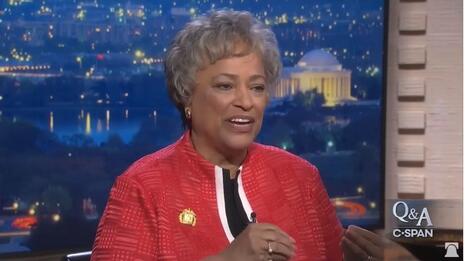 The Heritage Foundation has promised to no longer to accept financial support from Big Tech companies so long as the platforms suppress conservative viewpoints.

Heritage previously rejected a $225,000 donation from Google and returned $150,000 it received from Facebook.

President Kay C. James announced Tuesday she was signing a pledge with at least 35 other conservative leaders that calls out Big Tech’s censorship and refuses contributions from these companies.

"The Heritage Foundation will not in good conscience accept money from companies that repeatedly and blatantly attempt to silence conservative speech they don’t agree with,” she said. “Every time a new case of censorship comes to light, these companies trot out excuses and promises to do better. Enough is enough. I stand united with other conservative leaders against Big Tech’s censorship of conservative voices."

“We commend Heritage for turning down two six-figure contributions from Google and Facebook last year. That was a catalyst for the Media Research Center to urge all conservatives to do the same,” Bozell said. “Silicon Valley’s money is toxic and it’s poisoning our society. Big Tech—Facebook, Twitter, Google, YouTube and others—are pouring millions upon millions of dollars into Washington trying to buy influence. Conservatives must resist.”

In letters to Facebook and Google last year, James noted the platforms’ suppression of free speech was the reason for declining the donations.

“As you know, there is a growing momentum in Washington to rein in Google and other technology companies, either through antitrust action or changes in liability protections you enjoy,” James wrote. “Heritage is in the midst of reviewing these proposals, and the last thing we need is for anyone to think that our conclusions have in any way been influenced by a relatively small donation from your company.”

Heritage stated that it has never accepted any donations from Apple, Amazon, or Twitter. Heritage also reported that its corporate donations amount to less than 2 percent of all contributions.

Conservatives are under attack. Contact Google at 1-650-253-0000 and Facebook headquarters at 1-650-308-7300 to demand that Big Tech be held to account to mirror the First Amendment while providing transparency, clarity on “hate speech” and equal footing for conservatives. If you have been censored, contact us at the Media Research Center contact form, and help us hold Big Tech accountable.