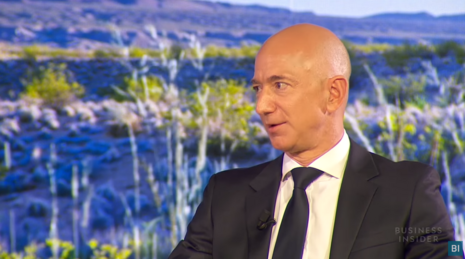 Amazon founder Jeff Bezos gave the White House a taste of its own medicine by asking the Disinformation Governance Board to fact-check President Joe Biden.

Bezos bludgeoned Biden for his economic blunder. Biden tweeted from this personal Twitter account on May 13: “You want to bring down inflation? Let’s make sure the wealthiest corporations pay their fair share.”

Bezos responded: “The newly created Disinformation Board should review this tweet, or maybe they need to form a new Non Sequitur Board instead. Raising corp taxes is fine to discuss. Taming inflation is critical to discuss. Mushing them together is just misdirection.”

Bezos continued to hammer the Biden administration for its atrocious economic policies in a separate tweet:

In fact, the administration tried hard to inject even more stimulus into an already over-heated, inflationary economy and only Manchin saved them from themselves. Inflation is a regressive tax that most hurts the least affluent. Misdirection doesn’t help the country.

Bezos did leave out one critical point in his criticism of the Biden White House: Big Government shouldn't be in the business of censoring at all.

One thing is clear, however, the Biden administration has been facing criticism for launching the DGB, and Twitter found some dark comedy in Bezos’s call to address disinformation from Biden himself.

Real Clear Investigations writer Mark Hemingway acknowledged a growing political shift among corporate elites against Biden: “I harbor no particular affection for Bezos, Musk, et al. but I definitely welcome the trend of influential people speaking up about the lack of common sense undergirding our stupid policies.”

Political commentator and comedian Tim Young observed that Bezos criticizing Biden is part of a larger trend of iconic leftists breaking ranks to address incompetence from the political establishment: “This past week, Biden lost Jeff Bezos and CNN (who cornered Fauci on air) on different issues... Forget polls, when you anger your propaganda funder and one of your top propaganda networks, you're in trouble.”

Christina Pushaw, a spokesperson for Florida Gov. Ron DeSantis, asked: “Do my eyes deceive me or has Bezos been tweeting good takes lately? Bezos’ Twitter account indicates he has “liked” numerous posts criticizing Cancel Culture, suggesting a growing distaste for the left’s obsession with silencing views they disagree with. Bezos’ recent Twitter likes range from a Netflix announcement telling employees offended by unwoke content to leave, to “liking” a post from Elon Musk suggesting the far left has gone way too far and abandoned the center-left.

As if on cue, socialist Sen. Bernie Sanders (I-VT) slimed Bezos in a tweet: