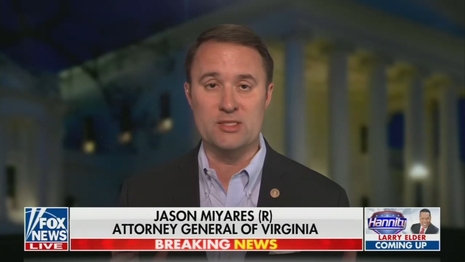 The great state of Virginia is leading the way as 20 state attorneys general warned that President Joe Biden’s Disinformation Governance Board is a threat to the First Amendment.

The time has come to see whether American states can save the republic. “Virginia is leading a letter with 20 state attorneys general warning the federal government that policing citizens' speech is a First Amendment violation,” Virginia Attorney General Jason Miyares tweeted May 9. “This level of federal overreach is un-American and will hurt our freedom of expression.”

Reclaim The Net reported that it obtained a copy of the letter. The letter did not mince words:

As the chief legal officers of our respective States, we the undersigned Attorneys General are tasked not just with enforcing the laws, but with protecting the constitutional rights of all our citizens. Today we write you to insist that you immediately cease taking action that appears designed exclusively for the purpose of suppressing the exercise of constitutional rights.

The letter shared a crucial point that the timing of when the censorship board  was announced was suspect aside from its innate sinister nature: “Suddenly, just as Elon Musk prepares to acquire Twitter with the stated purpose of correcting the platform’s censorship of free speech, you announce the creation of the Disinformation Governance Board.” The letter expounded further that “[a]s the Biden Administration apparently loses a critical ally in its campaign to suppress speech it deems ‘problematic,’ you have created a new government body to continue that work within the federal government.”

Like many in the pro-free speech movement have done, the letter made clear parallels to George Orwell’s dystopian novel 1984:

“In short, you seem to have misunderstood George Orwell: the ‘Ministry of Truth’ described in 1984 was intended as a warning against the dangers of socialism, not as a model government agency.”

To quote Orwell, “The Revolution will be complete when the language is perfect.”

The letter cited a litany of her worst hits:

She has previously suggested news that Hunter Biden’s laptop had been compromised was the product of a foreign disinformation campaign. She asserted that the theory tracing COVID-19 to a lab leak in China was invented because it was “politically convenient for Trump,” although the intelligence community now assesses that this theory may very well be correct. She has even praised Christopher Steele, the discredited author of the infamous false ‘dossier’ about President Trump, and one of the most notable peddlers of disinformation in recent memory.