Return of the King? Musk Declares He Would Un-Ban Trump

Is he back? Maybe. Billionaire and free speech advocate Elon Musk declared he will reinstate former President Donald Trump when he buys Twitter. But will Trump return if the ban is reversed?

Musk said he would reverse Twitter’s Trump ban at a recent automobile event. “Musk, the Tesla CEO who is soon to own Twitter, said it was a mistake for the website to ban the former president,” The Washington Post wrote on Tuesday.

The article reported that Musk warned while speaking at a Future of the Car event sponsored by the Financial Times: “I think it was a morally bad decision to be clear and foolish in the extreme.” He continued: “I do think it was not correct to ban Donald Trump. I think that was a mistake … It alienated a large part of the country and did not ultimately result in Donald Trump not having a voice.”

Musk in a video purportedly from the event explained his reasoning:

I guess the answer is that I would reverse the Twitter ban-obviously I don't own Twitter yet, so this is not like a thing that will definitely happen because what if I don’t own Twitter? My opinion, and I wanna be clear [former Twitter CEO] Jack Dorsey shares this opinion, is that we should not have perma-bans.

Musk hedged that the Twitter deal is still being worked out, but affirmed that his stance on Trump’s potential return is clear: “I guess the answer is I would reverse the permanent ban,” before adding, “I don’t own Twitter yet.” 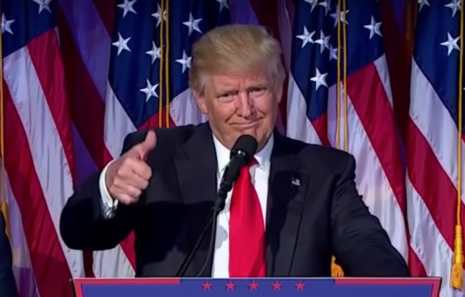 When asked whether Trump’s behavior in the final days of his presidency deserved consequences, Musk said: “a temporary suspension is appropriate but not a permanent ban.”

He acknowledged that “Banning Trump from Twitter didn’t end Trump’s voice — it will amplify it from the right,” condemning Twitter’s ban as “morally wrong and flat-out stupid.”

Elon Musk will reportedly serve as temporary CEO for Twitter after his deal to buy the platform is finalized, according to CNBC.

Musk initiated his acquisition of Twitter for $44 billion after scorching the platform for its history of censorship.

Many organizations, including some funded by liberal billionaire George Soros himself, signed a letter condemning Musk for acquiring the platform.

Twenty-six organizations ranging from gay advocacy to pro-abortion demanded corporations boycott Twitter They warned that Tesla CEO Elon Musk’s “takeover of Twitter will further toxify our information ecosystem and be a direct threat to public safety, especially among those already most vulnerable and marginalized.”