Police states ruled by uniformed generals are SO last century, the hour of the deep state hall monitor has come. Carlson slammed Biden’s new Disinformation Governance Board’s (DGB) in a late April episode of Tucker Carlson Tonight: “To herald the coming of the new Soviet America, the administration announced its own Ministry of Truth,” Carlson said. “This would be called the Disinformation Governance Board.” Carlson clarified that the agency is “using law enforcement powers to identify and punish people who think the wrong things – that would be opponents of the Biden administration.” 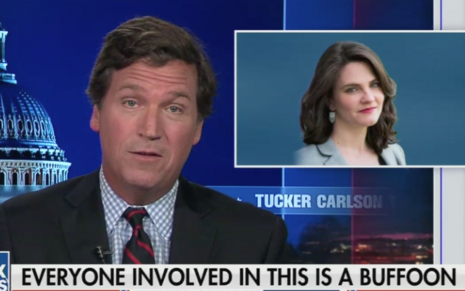 Tucker then went all in on Biden’s new “thought-cop in chief” Nina Jankowicz, who was put in charge of the DGB. Tucker noted how Jankowicz herself, despite being a supposed anti-misinformation expert, incorrectly slammed the Hunter Biden laptop narrative in a tweet as a “fairy tale” on the “eve of the presidential election.”

Jankowicz made it possible for a presidential candidate to lie from the debate stage about a story that may have changed the outcome of [an] election. Our election. Our presidential election, speaking of disinformation. She’s never apologized for that. That's because her role has nothing to do with the truth or stopping disinformation. Her job is to restrict any speech that challenges Joe Biden or the Democratic party.

Carlson observed that this incident crossed a clear line for America as a functioning Republic:

“Just to be clear, this is a nightmare unfolding in slow motion, but this is the point where we’re just gonna have to draw the line: No, Joe Biden, you can't have a federally funded Ministry of Truth and no, Nina Jankowicz can’t run it. Period.”

Politico outlined the new DGB’s purpose to “coordinate countering misinformation related to homeland security, focused specifically on irregular migration and Russia.” The outlet also noted that Jankowicz, who advised the Ukrainian government and served as a disinformation fellow at the Wilson Center, will head the board as executive director.

Jankowicz made a post linking to the Politico entry and admitted: “Cat's out of the bag: here's what I've been up to the past two months, and why I've been a bit quiet on here. Honored to be serving in the Biden Administration @DHSgov and helping shape our counter-disinformation efforts.”