Commentators condemned Canadian Deputy Prime Minister Chrystia Freeland as she announced that banks and payment processors will have the power to shut down accounts associated with Canadian Freedom Convoy protestors without a court order. The action would allow the state to seize bank accounts of Prime Minister Justin Trudeau's political opponents without a court order, and remove “any citizen's recourse to the courts,” Rebel Media founder Ezra Levant said.

He was reacting to a retraction from The New York Times, which claimed on Twitter, “An earlier tweet incorrectly suggested that Trudeau would temporarily suspend civil liberties.” Political commentators ranging from Conservative Partnership Institute Senior Director of Policy Rachel Bovard to academic experts Jordan B. Peterson also skewered Canada's leadership. 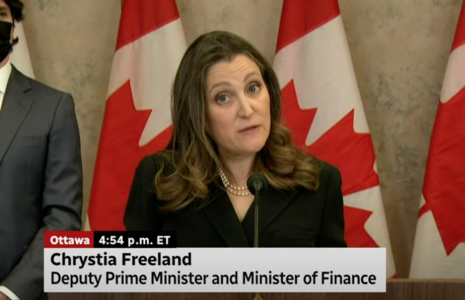 Bovard, also a Board Advisor for MRC Free Speech America, slammed the Canadian government and observed it is part of a much larger problem across Western civilization: “Weaponizing the banking system over ideology is now becoming a pattern in the West.”

Government crackdowns on citizens’ very ability to crowdfund on issues like the Freedom Convoy protest ignited a firestorm of controversy across the internet.

Recently retired University of Toronto Professor Jordan Peterson shredded proclamations from Trudeau, mocking his words directly: "’[T]he shared values that unite us’ our bank accounts are no longer secure from arbitrary government seizure @JustinTrudeau,” Peterson tweeted. He then mocked Canada’s Flag Day announcement in particular, contrasting it with the current state of the republic: "‘Today we celebrate our national flag’ as crowdfunding for political protest has been redefined as a terrorist act @JustinTrudeau.”

The Heritage Foundation Research Fellow in Technology Policy Kara Frederick urged her followers to “Open your eyes” as she shared a video of the same speech from Freeland. The tweet she shared from a Twitter user with the handle Cyprian noted: “This is the panopticon and the new digital gulag. This is the start of The De-personing. This will expand to every country and every ‘offense.’”

Human Events host Jack Posobiec posted the video of Freeland and summarized: “Trudeau regime now using terrorism laws to go after crypto and crowdfunding.” He asked his followers if they were “paying attention” as he responded to a tweet announcing: “Deputy PM says that they are using emergency powers to regulate crypto.”

The Freedom Convoy of truckers and their supporters have been staging peaceful protests against draconian COVID-19 mandates imposed by Canada’s federal government. It has used crowdfunding resources from GoFundMe to GiveSendGo to support itself logistically. The convoy has since met massive roadblocks at every turn, from Big Tech Censorship to outright hackers reportedly exposing their donors’ information.