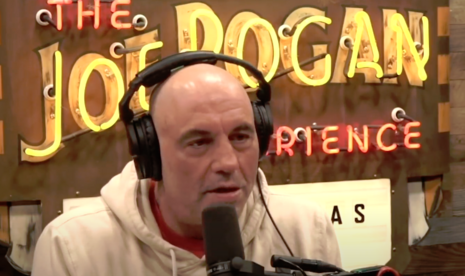 The embattled legendary podcaster Joe Rogan defended his right to speak his mind on his podcast.

Rogan, host of The Joe Rogan Experience podcast, slammed recent Cancel Culture witch hunts against his show: “This is a political hit-job, and so they're taking all this stuff that I've ever said that's wrong and smushed it all together,” he declared in a Feb. 8 podcast episode. While Rogan suggested that “you should apologize if you regret something,” he warned that there is a very clear line that must not be crossed: “I do think you have to be very careful to not apologize for nonsense.”

Rogan commented on the modern phenomenon of Cancel Culture as a politically charged sport, suggesting there are many who “will attack people all the time. And they want to, like, ‘cancel’ a person because they think that that person is foul, or they want to, like, they want to be able to do it because it is kind of a game. Like, if you can cancel someone and get them in trouble, there’s a lot of people that, like, go dig up old things that you've said.”

The Hollywood Reporter wrote that Rogan mocked Cancel Culture campaigns against his use of Spotify at a standup comedy performance in Austin, Texas: “I talk shit for a living — that’s why this is so baffling to me.” He later added, “If you want my advice, don’t take my advice.”

The Hollywood Reporter recounted that Rogan slammed both pearl-clutching liberals and Big Tech when he suggested, regarding people’s use of the N-word: “[I]t’s kind of weird people will get really mad if you use that word and tweet about it on a phone that’s made by slaves.” He then reportedly “segued into a bit about labor conditions at overseas cellphone factories.”

Rogan also appears to be standing by Spotify and honoring his contract. “During a question and answer portion with fans after the show, Rogan was asked if he would accept the $100 million offer from Rumble to move his show from Spotify to the right-wing platform,” The Hollywood Reporter explained. “The comedian said he was planning to stick with the streamer. ‘No, Spotify has hung in with me, inexplicably, let’s see what happens.’”

A major Cancel Culture campaign began in late January, when musician Neil Young issued an ultimatum to Spotify that he would remove his music if Rogan were to keep questioning Covid narratives. Later, 70 episodes were removed from Spotify after Rogan was criticized for past use of the N-word, despite its common usage in rap songs on Spotify.

Conservatives are under attack. Contact your representatives and senators and demand that Big Tech be held to account to mirror the First Amendment while providing transparency, clarity on “hate speech” and equal footing for conservatives. If you have been censored, contact us using CensorTrack’s contact form, and help us hold Big Tech accountable.