Keep on Rockin in the SAFE SPACE! Neil Young Tries to Cancel Rogan 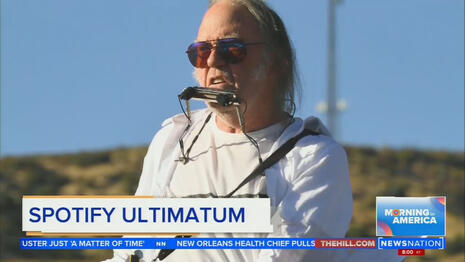 Neil Young has reportedly demanded that Spotify become a safe space for him. The Once-legendary Canadian-American singer delivered an ultimatum to Spotify, according to Rolling Stone: Get rid of the massively popular Joe Rogan Experience podcast or lose his music.

A questionably relevant singer demanding the removal of perhaps the world’s most popular podcast is a hard sell. “Neil Young posted a since-deleted letter to his management team and record label demanding that they remove his music from Spotify,” Rolling Stone reported Jan. 24. “‘I want you to let Spotify know immediately TODAY that I want all my music off their platform,’” he wrote, according to Rolling Stone.“They can have [Joe] Rogan or Young. Not both.”

Young later accused Spotify of “spreading fake information about vaccines” and “potentially causing death to those who believe the disinformation,” according to the magazine.

Rolling Stone also reportedly quoted his letter illustrating the power and influence Spotify offers to influencers. “With an estimated 11 million listeners per episode, JRE, which is hosted exclusively on Spotify, is the world’s largest podcast and has tremendous influence,” the letter read, according to Rolling Stone. “Spotify has a responsibility to mitigate the spread of misinformation on its platform, though the company presently has no misinformation policy.”

The publication noted: “At press time, Spotify hadn’t responded to a request from Rolling Stone asking if they planned to remove Young’s music. It’s still available, but it might be smart to listen to Zuma and Rust Never Sleeps while you still can. They could disappear at any moment.”

The letter is indeed deleted from Young’s website, Neil Young Archives, but the URL still includes the term “A-Message-To-Spotify.” Considering how he has an entire section devoted to “Black Lives Matter,” he appears to be brazen about his far-left credentials.

Rogan has a history of causing controversy within Spotify between leadership, who paid millions to have him exclusively broadcast on the platform, and staff, who said they want Rogan deplatformed.

“In a Spotify all-hands company meeting on Wednesday, Spotify CEO Daniel Ek defended keeping transphobic content from hugely popular podcaster Joe Rogan on the audio platform,” Vice Motherboard summarized Sept. 16, 2020. "In the case of Joe Rogan, a total of 10 meetings have been held with various groups and individuals to hear their respective concerns….And some of them want Rogan removed because of things he's said in the past."