Comedian, actor and commentator Russell Brand called out the fact that Twitter once represented the Wild West of free speech, but has since become a machine for controlling public opinion. The unexpected rise of former President Donald Trump propelled the shift, he observed.

Trump may have initially become famous as a liberal entertainer, but Brand called out the big reason Big Tech and the political establishment have cracked down on Trump and his supporters. “I suppose one of the things that make me sympathetic towards affiliates of Trump, aficionados of Trump, is the way that Trump is subsequently being handled and censored and controlled,” he explained in a Dec. 1 episode of his YouTube show. After reading an excerpt from investigative reporter Matt Taibbi Substack post, noting how Trump forever discredited the establishment and undermined the media to such an extent that they “couldn't put the genie back in the bottle,” Brand explained, “What I have to acknowledge, and what I’m sympathetic towards, is censorship.” 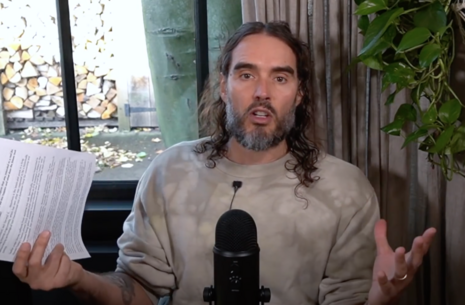 Brand read one powerful excerpt from Taibbi’s piece about how Trump’s meteoric rise via Twitter sparked a backlash against the very idea of free speech online:

“The real problem Trump represented for elite America had less to do with his political beliefs than the unapproved manner of his rise. Twitter, seen as a co-conspirator in this evil, became a target of establishment reprisal after Trump’s win.”

Brand has a history of calling out Big Tech. In a previous video, he asked, “Did the media and social media conspire together to keep information about Joe Biden and Hunter Biden’s relationship with foreign energy companies out of the media?” He shortly answered: “The answer is: Yes, they did,” before sharing clips from his interview with independent journalist Glenn Greenwald about corruption in the media. “[R]evelations that there are financial connections between energy companies in the Ukraine, energy companies in China, and the Biden family, are troubling,” Brand said. “That should be public knowledge. And it’s even more troubling that Twitter and Facebook and the media at large deliberately kept it out of the news because they didn’t want it to influence the election.”

Conservatives are under attack. Contact Twitter at (415) 222-9670 and demand that Big Tech mirror the First Amendment while providing transparency and equal footing for conservatives. If you have been censored, contact us using CensorTrack’s contact form, and help us hold Big Tech accountable.