This week, Manhattan Institute Senior Fellow Chris Rufo was unverified by Twitter and reportedly targeted by a “Government-backed attack” after he allegedly exposed Critical Race Theory policies at Google.

Google, one of the world’s most powerful companies, has reportedly embraced one of the world’s most dangerous ideologies: Critical Race Theory. “Google has launched an ‘antiracism’ initiative claiming that America is a ‘system of white supremacy’ and that all Americans are ‘raised to be racist’—including Ben Shapiro, who is depicted as a layer of the ‘white supremacy pyramid,’ culminating in ‘genocide,’" Rufo declared in a tweet on Wednesday.

In subsequent tweets, he illustrated that he had “obtained a trove of whistleblower documents from inside Google that reveal the company’s extensive racial-reeducation program,” including purported screenshots of video and slide presentations.

Following the critical race theory exposé tweet thread, Rufo declared that he faced swift backlash: “In the past week, Google has sent me an alert about a ‘government-backed attack’ against my email system and Twitter has unverified my account—just as I began my investigative reporting on critical race theory in Big Tech.” He included alleged screenshots from Twitter Support and Google.

Rufo explained in an interview on Fox News PrimeTime that Big Tech’s unchecked power represents an existential threat to American life and needs to be regulated: “I think a lot of these tech companies should be regulated as common carriers, like, you know, you can't deny someone the phone service from AT&T because of their political views. It should be the same for something like Google. And what we see inside these companies is that increasingly the ideology of Google employees is actively hostile to the United States.”

Rufo published screenshots of what appears to be an absurd powerpoint presentation, claiming: “In a modul 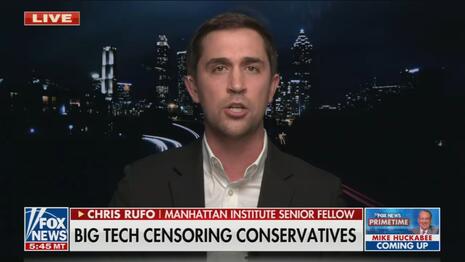 e called ‘Allyship in Action,’ Google trained employees to deconstruct their racial and sexual identities, and then rank themselves on a hierarchy of ‘power [and] privilege,’ then ‘manage [their] reactions’ through ‘cry[ing]’ and ‘accessing [their] 'happy place.'"

City Journal reported on some of the most alarming highlights of alleged racial indoctrination at Google: “[E]mployees at Google created an internal document called ‘Anti-racism resources,’ which contains reading lists, graphics, and racial-consciousness exercises” that had been “created by Google diversity, equity, and inclusion lead Beth Foster, hosted on Google’s internal-resources server, and made available across the company.”

City Journal summarized another graphic titled “The White Supremacy Pyramid,” that “advances the idea that conservative commentator Ben Shapiro represents a foundation of ‘white supremacy’ and that Donald Trump is moving society on a path toward ‘mass murder’ and ‘genocide.’”

Conservatives are under attack. Contact Google at 1-650-253-0000 and demand that the platform treat Americans in accordance with the content of their character, not the color of their skin. If you have been censored, contact us at the Media Research Center contact form, and help us hold Big Tech accountable.