Fox News host Tucker Carlson interviewed former New York Times journalist and author Alex Berenson after Twitter “suspended” his account for alleged misinformation. He urged Berenson to take legal action, and suggested it would be a great comeuppance for the whole nation to watch. 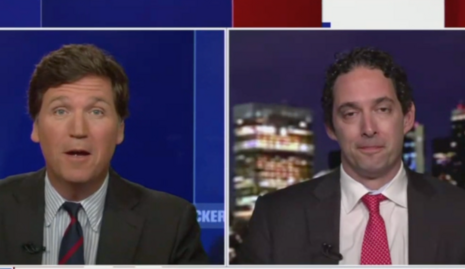 Berenson explained that “Twitter is a much larger platform” than rising platforms like Substack, despite newer platforms allowing more free speech. He explained that he is not being censored without a fight: “I think I have a First Amendment claim, you know, in that Twitter is sort of the modern town square. And in California, actually, where Twitter is based, there is special protection for this.” He later added that “Twitter, you know, wants to fight battles in court in California, and we’ll see if that works to their advantage or not.” Carlson encouraged Berenson to go full speed ahead with his legal case against Twitter: “I hope you sue the crap out of these totalitarians. I really do. And if you do, I hope you’ll come back and tell us how we can, you know, buy popcorn and watch.”

Berenson also noted that there is a second legal angle to his dispute with Twitter:

“And then, I think, there is a separate issue here, which is that Twitter has defamed me. Twitter has said that my information is inaccurate. And, you know, as a result, everybody from VICE to other places, you know, they say terrible things about me, and they say I'm disgraced or that I, that I’m putting out false information.”

Fox News reported that Twitter “permanently suspended” Berenson for his alleged “repeated violations of [Twitter’s] COVID-19 misinformation rules.” Twitter has temporarily restricted Berenson’s account on multiple occasions for his outspoken criticism of how the COVID-19 pandemic has been handled. In “the tweet that did it,” as Berenson described it, he claimed that the controversial COVID-19 vaccines should not be thought of as vaccines but rather as “therapeutic[s].”

Berenson posted a purported picture of his final tweet in his online Substack newsletter, Unreported Truths.  “[The COVID-19 vaccine] doesn’t stop infection or transmission,” read the tweet. He added, “[d]on’t think of it as a vaccine. Think of it - at best - as a therapeutic with a limited window of efficacy and terrible side effect profile that must be dosed IN ADVANCE OF ILLNESS. And we want to mandate it?”

Berenson has good reason to criticize Big Tech for being too quick to censor when stories are still developing. PolitiFact initially had a field day with the claim that COVID-19 originated in a lab in Wuhan, China, calling such claims “debunked conspiracy theor[ies].” After revelations from U.S. government officials and the media, PolitiFact had to archive the fact-check.

Conservatives are under attack. Contact your representatives and demand that Big Tech mirror the First Amendment and provide equal footing for conservatives. If you have been censored, contact us at the Media Research Center contact form, and help us hold Big Tech accountable