“Twitter said on Monday that it was suspending Representative Marjorie Taylor Greene from its service for 12 hours after she posted messages that violated its policy against sharing misleading information about the coronavirus,” The New York Times reported July 19. After her suspension was over, Greene torched Twitter, claiming, “[it] banned me for 12 hrs, censoring me, & violating my freedom of speech.” She then compared Twitter’s leadership to state censorship by “CommunistChina.” 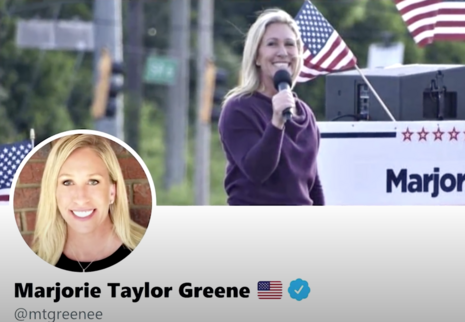 A Twitter spokesperson explained to the MRC that “[w]e took enforcement action on the account you referenced (@mtgreenee) for violations of the Twitter Rules, specifically the COVID-19 misleading information policy (Tweets here and here).”

The spokesperson linked to Twitter’s so-called “COVID-19 misleading information policy” page. The overview summarized: “Content that is demonstrably false or misleading and may lead to significant risk of harm (such as increased exposure to the virus, or adverse effects on public health systems) may not be shared on Twitter.” The spokesperson also explained Twitter has been ramping up penalties on users that repeatedly violate the platform’s policies, noting that Greene has received multiple strikes in the past.

Greene reportedly explained to The Times that “[t]hese Big Tech companies are doing the bidding of the Biden regime to restrict our voices and prevent the spread of any message that isn’t state-approved.”

The government has indeed gotten comfortable with bossing Big Tech companies around.

President Joe Biden explained in an interview that Big Tech platforms, by not restricting speech enough, are somehow “killing” American citizens. When asked, “On COVID misinformation, what’s your message to platforms like Facebook?” Biden responded:

Greene made it clear in a Newsmax interview that Big Tech censorship is one of her core political talking points: "Another thing we have to do is we have to crack down on the censorship, remove Section 230," Greene declared on "Cortes & Pellegrino." She continued to explain that "[t]hese companies should not be protected. They don't deserve the protection, especially when they're working with the current regime to restrict Americans’ free speech and censor our voices.

"So that would be No. 1 on my list,” Greene announced.