Sanders appeared on “The Ezra Klein Show '' podcast from The New York Times. He discussed topics such as whether liberalism in general has become “too censorious” and “too willing to use their cultural and corporate and political power to censor.” While Sanders affirmed that he thought Trump was “a bad news guy,” he admitted: “But if you’re asking me, do I feel particularly comfortable that the president, the then-president of the United States could not express his views on Twitter? I don’t feel comfortable about that.” 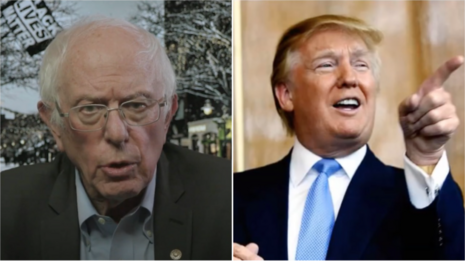 Meanwhile, a person close to Trump explained that the former president wanted nothing to do with the platform anyway. “There's not a chance in hell he gets back on Twitter. Really, I mean that,” Politico reported March 24. “He gave them his business, made it the premier app for news, debates and gossip during his presidency and in the end they said 'Sayonara.' So no, he has zero interest in rejoining.”

Insiders indicated “the allure [of Big Tech] has worn off” for Trump, explained Politico, and he has seen his purge by Twitter as an opportunity to change his approach to outreach. Insiders said Trump “seems to be taking new pleasure in the attention his more sporadic engagement through press statements has attracted,” reported Politico.

Trump explained that his new form of engaging the political realm fits him just as well.

"Everybody is waiting, and I think I’m getting better and more coverage with that than I did with tweeting," Trump said in a March 22 interview on Newsmax TV's Greg Kelly Reports. Trump added “I like this better than Twitter,” suggesting the ban did him a “favor.”

Regardless of Trump’s current game plan, Sanders’s opinions on Big Tech censorship are mixed as he admitted “I don't know what the answer is.” On one hand, Sanders explained that he doesn't want “hate speech and conspiracy theories traveling all over this country.” While on the other hand, Sanders admitted the actual practical answer to how Big Tech platforms should treat speech and politicians he dislikes was not easy:

“So how you balance that? I don’t know, but it is an issue that we have got to be thinking about. Because if anybody who thinks, you know, yesterday it was Donald Trump who was banned and tomorrow it could be somebody else who has a very different point of view.”

Multiple Big Tech platforms cracked down on Trump’s accounts following the former president’s call for peace amid political unrest in D.C., which saw rioters storm the U.S. Capitol building on January 6. The crackdown on a sitting president and his supporters was so severe that even foreign world leaders ranging from Mexico to members of the European Union condemned Big Tech in the following days.