Big Tech continues to let Rev. Louis Farrakhan, the infamous leader of the Nation of Islam, to spread conspiracies that would cause conservatives to be censored.

Farrakhan spoke at the Nation of Islam’s annual Saviours’ Day, and condemned both the COVID-19 vaccine as a “vial of death” and the people who defend it. Farrakhan commented, “You laugh at Reverend Jim Jones with Kool-Aid, this is the biggest dose of Kool-Aid that the enemy has ever offered. It is death itself,” he claimed. Both Facebook and Twitter have allowed this video to be linked from the Nation of Islam’s accounts.

“Do you think we give a damn about you telling us that you can't fly if you don't have this? We’ll close down all your airlines,” Farrakhan boasted, before continuing: “Wait, we can't go to school? We weren't learning a damn thing anyway!” He proclaimed. “This will force us to make our own schools and make them safe. Don't let the enemy frighten you with what they have the power to keep you from. If they do this they keepin’ us from them. They are now the great architects of separation or death.” 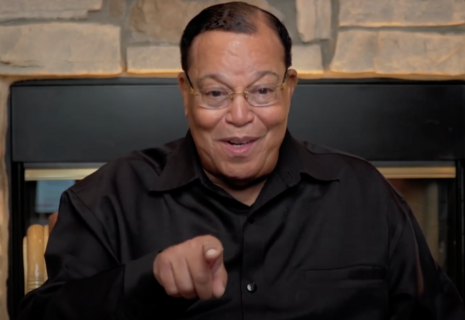 “Farrakhan chided black celebrities who have promoted the vaccine, saying that they were ‘being bought and paid for’ by the government and aid in the ‘destruction of your people,’” The Daily Caller wrote in its report. “Farrakhan, 87, falsely accused Fauci last year of plotting with Bill Gates to use a coronavirus vaccine to ‘depopulate the Earth.’”

Facebook allowed the Nation of Islam Facebook page to link to this broadcast of the Saviour’s Day event. Facebook has a history of massive hypocrisies on COVID-19 censorship.

Guerrilla journalism group Project Veritas shared leaked footage of Zuckerberg voicing skepticism about mRNA COVID-19 vaccinations during a July 2020 talk. Project Veritas explained that “[Zuckerberg] was worried about the impact a COVID-19 vaccine would have on an individual’s DNA and RNA.” Zuckerberg’s precise statement expressed extreme caution about the developing treatment to solve the COVID-19 pandemic:

“But I do just want to make sure that I share some caution on this [mRNA vaccine] because we just don't know the long-term side effects of basically modifying people's DNA and RNA … basically the ability to produce those antibodies and whether that causes other mutations or other risks downstream.”

Project Veritas alluded to an announcement Facebook made earlier on Feb. 8 that the platform was “Expanding our efforts to remove false claims on Facebook and Instagram about COVID-19 and vaccines.” One key detail Project Veritas illuminated was that “In this new policy, Facebook specifically stated that any claims that the vaccine changes an individual’s DNA would be removed.”

Farrakhan, in addition to sharing conspiracies that would not be allowed from Republican leaders, has indeed made offensive and dehumanizing anti-Semitic and anti-American statements in the past. Farrakhan has made statements such as: “You know what they do: call me an anti-Semite. Stop it. I’m anti-termite,” and chanted “Death to America” in a high-profile visit to Iran. Even the anti-conservative SPLC has condemned his organization as having a “bizarre and fundamentally anti-white theology.”

Conservatives are under attack. Contact Facebook headquarters at 1-650-308-7300 and demand that Big Tech be held to account to provide clarity on “hate speech” rules that seem to be applied inconsistently. If you have been censored, contact us at the Media Research Center contact form, and help us hold Big Tech accountable.