“I think that Big Tech is doing a horrible thing for our county and to our country, and I believe it’s going to be a catastrophic mistake for them,” Trump said as he embarked from a plane in a Jan. 12 video published by C-SPAN. Trump commented that Americans are already mobilizing in response to the unprecedented censorship: “There’s always a countermove when they do that. I have never seen such anger as I see right now, and that’s a terrible thing — a terrible thing. And you have to always avoid violence.” 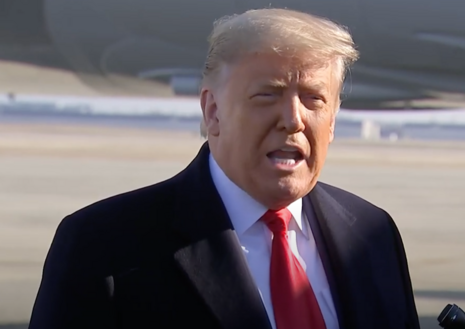 Trump condemned all political “violence,” including riots, which occurred over the summer. He further suggested Big Tech plays a unique role in being “divisive” for America.

Twitter began a censorship apocalypse in recent days after it purged Trump. Multiple Big Tech platforms even cracked down on Trump’s call for peace amid the D.C. chaos, which saw rioters storm the U.S. Capitol building. Eliminating a sitting president’s online presence appears inconsistent from a site that has allowed foreign dictators and even pro-genocide propaganda.

Twitter made clear that no amount of radical censorship is off the table.

“After close review of recent Tweets from the @realDonaldTrump account and the context around them we have permanently suspended the account due to the risk of further incitement of violence,” Twitter announced on Jan. 8. Twitter Safety explained that “we made it clear on Wednesday that additional violations of the Twitter Rules would potentially result in this very course of action.”