Google-owned Youtube was caught censoring a historical documentary about the American Revolution. 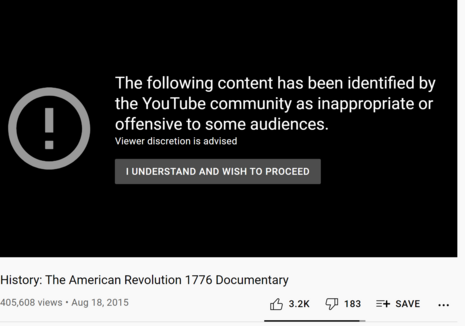 The YouTube video titled “History: The American Revolution 1776 Documentary,” was restricted until Free Speech America inquired with the platform why such an innocuous video would be considered “inappropriate or offensive.”

“We've removed the age-restriction on the video you shared,” YouTube Policy Communications Manager Ivy Choi told Free Speech America in an email. “Occasionally, a video flagged to us may be mistakenly age-restricted. When this is brought to our attention, we review the content and take appropriate action, including removing the age-restriction.”

The video was originally uploaded in 2015. Free Speech America was able to confirm that as far back as at least Nov. 19, 2020, the documentary was “age-restricted” by the platform.

Additionally, before YouTube removed its restrictions, users had to click through two separate warnings asking if they were sure they wanted to view the video.

While Webber’s video chronicles disturbing events that have occurred under Newsom’s governorship, other newsworthy events, such as a CNN news report on the Aug. 26 terrorist attack in Afghanistan, do not include any warnings from YouTube.

In recent months the video sharing platform has had other troubling incidents. YouTube received criticism from a U.S. congresswoman after it reportedly removed a video of a news conference that discussed a legal challenge to New York City Mayor Bill de Blasio’s (D) “vaccine passports.” YouTube appeared to remove Sen. Rand Paul’s (R-KY) video protesting the platform’s censorship of one of his videos, and reportedly suspended him for seven days. YouTube also censored a video from the Convention of States Project hosted by its president, Mark Meckler, according to the organization.

Conservatives are under attack. Contact your local representative and demand that Big Tech be held to account to mirror the First Amendment. If you have been censored, contact us using CensorTrack’s contact form, and help us hold Big Tech accountable.