Even after years of liberal media and politicians calling for the censorship of online speech, a plurality of Americans still say the government should not intervene — even at the cost of some false information slipping through.

A new study from the Pew Research Center shows that despite an onslaught from the left against free speech online, a greater percentage of Americans still say First Amendment speech rights on the internet should be protected from government intervention.  A plurality of U.S. adults (50%) say that “Freedom of info should be protected, even if it means false info may be published,” while only 48 percent say that “The U.S. government should” restrict online speech “even if it limits freedom of info.” 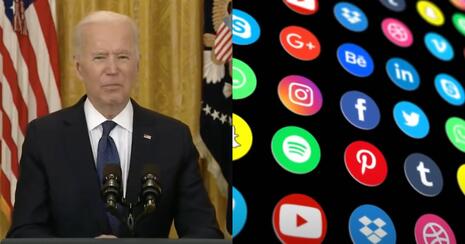 Pew conducted a survey of 11,178 American adults between July 26 and Aug. 8, 2021. It found that 48 percent “say the government should take steps to restrict false information, even if it means losing some freedom to access and publish content.” That is up from 39 percent in 2018, according to Pew.

Conversely, Pew reported an 8-point decline since 2018 of U.S. adults who say First Amendment speech rights online should be protected from government intervention. It’s not surprising that the percentage of Americans who “say government should take steps to restrict false information online” is greater now than in 2018, considering the constant barrage from the left to stifle information online they deem false.

Pew’s study admits more Americans want the government to keep its hands off the flow of information online. Yet, White House Press Secretary Jen Psaki indicated in a July 15 press conference that the federal government has “increased disinformation research and tracking,” has been “flagging problematic posts for Facebook that spread disinformation” and is “helping get trusted content out there.”

Additionally, back during the Democratic presidential primary in 2019, then-candidate for president Sen. Kamala Harris (D-CA) called for Trump to be banned from Twitter.

A larger swath of Americans support the removal of purported misinformation by Big Tech companies. “A majority of adults (59%) continue to say technology companies should take steps to restrict misinformation online, even if it puts some restrictions on Americans’ ability to access and publish content,” the Pew study reported. “Around four-in-ten (39%) take the opposite view that protecting freedom of information should take precedence, even if it means false claims can spread.”

Conservatives are under attack. Contact your representative and demand that Big Tech mirror the First Amendment. If you have been censored, contact us at the Media Research Center contact form, and help us hold Big Tech accountable.