On Friday morning, all three of the major broadcast networks surprisingly covered the latest in the Hillary Clinton e-mail scandal as 15 e-mails between Clinton and former confidante Sidney Blumenthal were discovered missing from her time at the State Department. Despite the over five and half minutes of coverage, CBS and NBC expressed concern that “the revelation” could create “a new distraction” for Clinton’s presidential campaign.

In an opening tease for Friday’s Today on NBC, co-host Matt Lauer informed viewers: “Missing, the State Department reveals it can't find all or part of at least 15 work-related e-mails from Hillary Clinton's private server. A leading Republican lawmaker is calling it “significant and troubling.” Will the revelation impact her presidential campaign?”

A few minutes later, co-host Savannah Guthrie introduced the segment by stating that the former First Lady is “facing some new questions this morning over e-mails from her time as secretary of state” as the “State Department now acknowledging the archive that she gave them was incomplete.”

White House correspondent Kristen Welker pointed out that “since announcing her candidacy, Hillary Clinton has been dogged by questions about her use of a private e-mail account while serving as secretary of state.”

Welker continued by describing the scandal as “a political liability” with a consequence being that a “majority of Americans saying she's not honest and straightforward, and it's giving Republicans plenty of fodder.”

Joining Lauer after Welker’s report, Meet the Press moderator Chuck Todd also mentioned the poll numbers as an example that the on-going story “has taken a toll on her,” but maintained that “[t]t hasn't impacted her on any other part of her poll standing with Democrats, in particular, but even overall.” 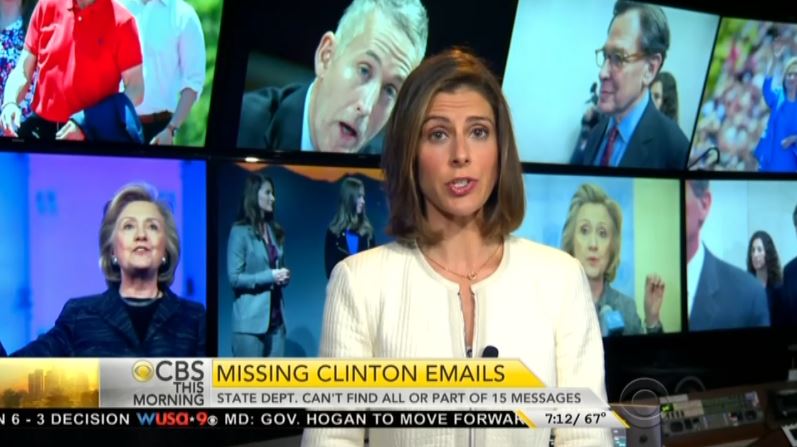 CBS This Morning co-host Charlie Rose noted that the State Department has stated that it “can’t locate at least 15 messages” and tossed to correspondent Julianna Goldman by observing that “the report is raising new questions about the presidential candidate.”

Following on that theme, Goldman reported that the omission “raise[s] questions about whether Clinton handed over all worked-related messages from the time she was secretary of state.”

While “[t]he State Department also says that the missing e-mails...are not relevant to the 2012 attacks in Benghazi,” Goldman brought up the reactions by both the Clinton campaign and Benghazi Committee Chairman Trey Gowdy (R-S.C.), who declared that: “The revelation these messages were not originally produced by Clinton to the State Department is significant and troubling.”

In her conclusion, Goldman worried that “[t]he revelations could create a new distraction for Clinton’s presidential campaign and also increased calls for House Speaker John Boehner to let the Benghazi Committee subpoena the private server that housed Clinton's e-mails.”

While CBS and NBC gave at least full reports on the new developments, ABC’s Good Morning America spent only 24 seconds on the story. Fill-in newsreader Dan Harris reported the following (after a lead-in from substitute co-host David Muir):

New questions about her use of private e-mail as secretary of state. The State Department says Clinton failed to turn over 15 e-mail messages. Those messages dealt with the security situation in Libya. The Republican lawmaker who’s heading the investigation into the attack on Benghazi called them omission “significant and troubling.” A Clinton spokesman says she turned over all of her e-mails.