CBS, NBC Again Refuse to Criticize Obama on ISIS After Fall of Ramadi

CBS and NBC continued their refusal on Monday evening to criticize the Obama administration’s handing of Iraq and so-called policy on ISIS as the Islamic terror group seized control of Ramadi over the weekend.

While those two networks continued to spin for the White House, ABC went in the other direction (albeit slightly) by providing a blunt critique of the Obama administration for “painting far too rosy a picture of how this war is going for far too long.”

On the CBS Evening News, anchor Scott Pelley portrayed the news as not a defeat for the U.S., but “a serious defeat” for “Iraq’s U.S.-trained military” as “[i]t was chased out of the city of Ramadi” by ISIS. Pelley did, however, bring up the fact that “[i]t is the capital of a province that was once secured at the cost of 1,300 American lives.”

Foreign correspondent Clarissa Ward then reported on how ISIS had easily overrun the Iraqi military and “came in spite of intensified U.S. efforts to push back Islamic state fighters with at least 180 air strikes on the city in the last month.”

Similarly to Pelley, Ward declined to criticize the President’s withdrawal of troops from Iraq and his handling of ISIS other than to state that “the U.S. is in an awkward position” in that it has changed its position from refusing to help Iran-backed Shia militants to suggesting that they “do have a role to play as long as they are operating under the control of the Iraqi government.”

Monday’s NBC Nightly News offered an almost identical take as interim anchor Lester Holt led off with the admission that Ramadi “has a lot of meaning to a lot of American families” as “it’s a city where one of three American casualties occurred during the Iraq War.” Just prior to correspondent Bill Neely’s report, Holt added that “after all that sacrifice by American servicemen and women, Ramadi...is now in the hands of the enemy.”

While Neely neglected to criticize the administration, he parroted a Pentagon statement from Monday when he declared that Ramadi’s fall represented “a setback for the U.S.” Later, Neely concluded by observing that, with ISIS continuing to push further into Iraq, “U.S. war planes and Iraq troops [are] struggling to defeat it.”

Meanwhile, ABC’s World News Tonight struck a different tone with a rebuke of the Obama administration from chief foreign correspondent Terry Moran. Leading into Moran’s report, anchor David Muir noted how: “Tonight, even the White House conceding this is a ‘setback.’”

After showing video of ISIS celebrating their victory, Moran ruled that “[t]he fall of Ramadi is another major defeat for” not only “Iraq’s shaky army” but also “for the United States.”

Following his mention that “hundreds of American troops gave their lives to keep this city out of the hands of extremists,” Moran ripped the Obama administration for the way its portrayed the current state of its fight against ISIS:

Today, in Washington, administration officials acknowledged this is a setback, but said the U.S. will help Iraq take Ramadi back, but the administration has been painting far too rosy a picture of how this war is going for far too long.

On ABC's Good Morning America, Moran chose not to venture as far as he would do later in the day and instead simply stated that Ramadi's fall “really just undercuts the rosy statements in recent weeks from the White House and Pentagon on how the war is going.”

The transcript of the segment from the CBS Evening News with Scott Pelley on May 18 can be found below. 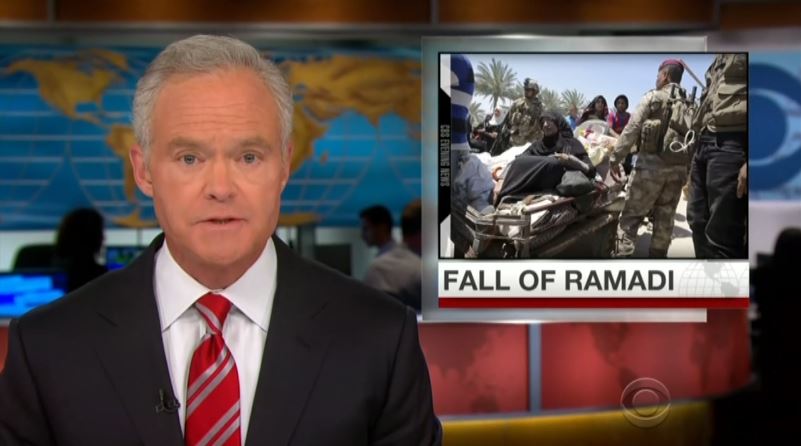 SCOTT PELLEY: Iraq's U.S.-trained military suffered a serious defeat yesterday. It was chased out of the city of Ramadi by the Islamic militant group known as ISIS. The U.N. says 25,000 civilians are fleeing the city now. Ramadi is a city of 500,000, 70 miles west of Baghdad. It is the capital of a province that was once secured at the cost of 1,300 American lives. Clarissa Ward is following this.

CLARISSA WARD: It is the biggest military victory for ISIS since last summer when the militant group left Iraq's second largest city of Mosul. After four days of intense fighting, Iraqi authorities said that 500 people were left dead, thousands of civilians fled as the black flag of ISIS was raised over Ramadi. The fall of Ramadi came in spite of intensified U.S. efforts to push back Islamic state fighters with at least 180 air strikes on the city in the last month. As ISIS militants flooded in, Iraqi security forces appeared to flee. Policemen abandoned their stations, leaving behind their American-supplied weapons and equipment. Ramadi is the largest city in the mainly Sunni province of an Anbar, which stretches from the western edge of Baghdad to Syria and Jordan. Anbar was the heart of the insurgency against U.S. forces during the Iraq War. Nearly 1,300 U.S. Marines and soldiers were killed there. Last month, Iraq's Prime Minister promised a sweeping new military offensive in Anbar to rout out ISIS militants, but with the retreat of the Iraqi army, there are few appealing options. Now, the Iraqi government has mobilized its Shiite militias, some supported by Iran to try and reverse its losses. It is a controversial move. Many fear the presence of Shia paramilitary forces will reignite a religious war with Sunni and tribes in Anbar.

PELLEY: And Clarissa is joining us now. Clarissa, quick question: The U.S. government has said in the past that it will not provide air support if these Shia militias controlled by Iran are in the fight. So where does this leave the U.S. now? 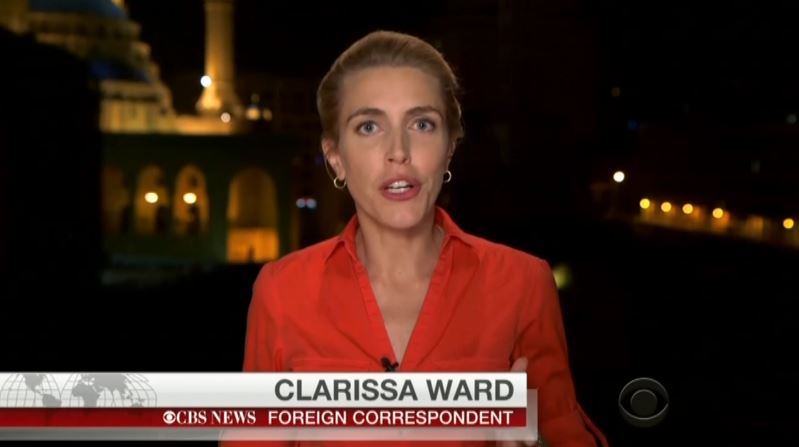 WARD: Well, Scott, the U.S. is in an awkward position here, as you pointed out during the battle for Tikrit, the U.S. military initially sat out saying it wouldn't participate while those militias were operating on the ground, but today, they appear to be walking back from that position, saying that the Shiite militias do have a role to play as long as they are operating under the control of the Iraqi government.

PELLEY: Maybe an indication of how difficult things have become. Clarissa Ward reporting for us in Beirut. Clarissa, thank you.

The relevant portions of the transcript from May 18's NBC Nightly News can be found below. 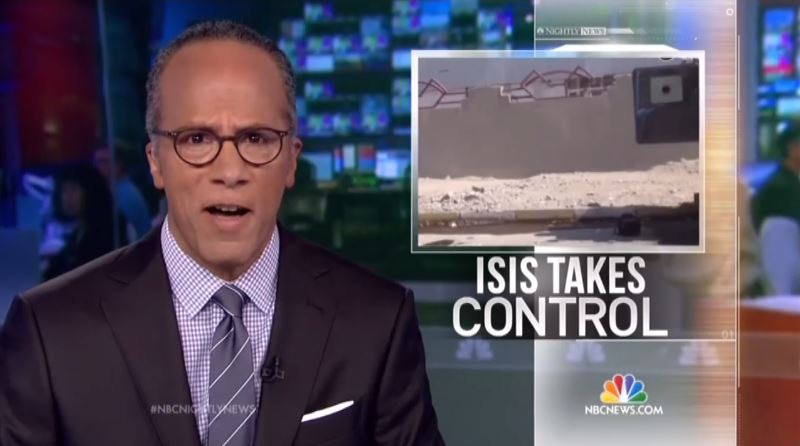 LESTER HOLT: Turning overseas now where ISIS has overrun the city of Ramadi, a city that has a lot of meaning to a lot of American families. Not only the capital of Anbar province but it’s a city where one of three American casualties occurred during the Iraq War. Now, after all that sacrifice by American servicemen and women, Ramadi, less than 70 miles from Baghdad, is now in the hands of the enemy. NBC's Bill Neely has our report.

BILL NEELY: The retreat from Ramadi was fast and humiliating. Iraqi troops in dozens of armored vehicles, in a race for their lives. Forcing them out, ISIS fighters who shot this propaganda video showing a city abandoned by the army. ISIS gunmen controlling the hospital in the city's center. Iraqi troops fought for just two days, leaving behind American-supplied weapons and tanks, but it's a setback for the U.S. A decade ago, NBC News was in Ramadi where hundreds of American troops gave their lives to hold the city. Today, Ramadi is held by the world's biggest terror group and it will be tough to retake. 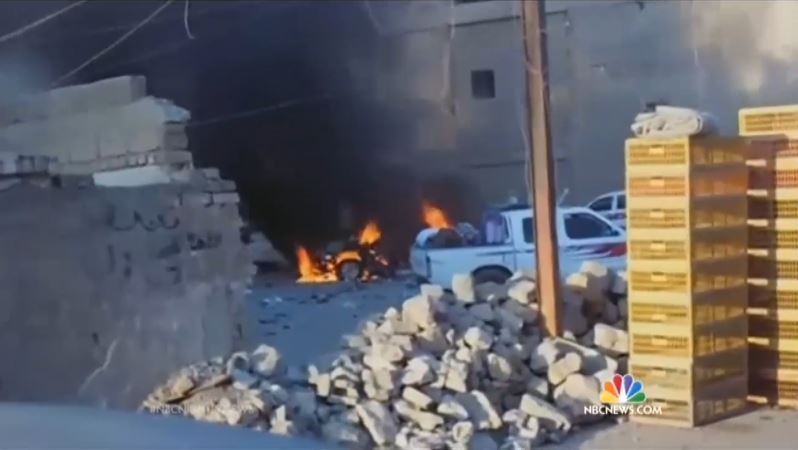 NEELY: But U.S. air strikes pounded ISIS positions around Ramadi for weeks. It didn't work. Air power has its limits....Critics like Senator John McCain are calling for U.S. boots on the ground which the Obama administration has so far ruled out. Both the U.S. and Iraq will now rely on Shiite militias to retake the Sunni city of Ramadi. They helped regain Tikrit last month, but they are armed and backed by Iran. Its influence is growing. The U.S. is uneasy. Iraqi officials say ISIS or Daesh, in Arabic will be beaten.

NEELY: But ISIS is now pushing toward the capital, Baghdad with U.S. war planes and Iraqi troops struggling to defeat it.