After the network morning and evening newscasts ignored a Reuters poll showing tumbling support for Hillary Clinton last week, the CBS Evening News bucked the trend and covered the results of its own poll that also found dwindling support for Clinton in light of recent scandals.

While the program spent only 32 seconds on the results of the poll, anchor Scott Pelley was still able to highlight three key results from the poll that served as bad news for former Secretary of State Clinton as she’s expected to launch a presidential campaign in the near future.

Before informing viewers of a few findings, Pelley first observed that her “e-mail scandal is taking a toll” on her “image as she gets ready to run for president.”

Diving into the results of the poll with graphics popping up alongside him, Pelley reported that “29 percent of Americans say their opinion of her has grown worse as a result of revelations that she used her personal e-mail account for State Department business.”

To help illustrate how much support she’s been losing, Pelley brought up the fact that her favorability rating “has fallen sharply from 38 percent” in a CBS News poll from November 2013 to just 26 percent in the new poll unveiled Thursday morning.

In the final statistic mentioned in the news brief, Pelley remarked that “less than half, just 42 percent, say Mrs. Clinton is honest and trustworthy.”

Also in the poll (but not covered on television) is a question as to whether respondents thought Clinton’s actions of using exclusively a private e-mail account and server were “appropriate” or “not appropriate.” A strong majority of 62 percent found that her conduct was not appropriate while on 25 percent thought what she did was appropriate.

While CBS covered the poll results and a DOJ report detailing “sex parties” attended by Drug Enforcement (DEA) agents after its segments on the top stories of the Germanwings plane crash and gas explosion in New York City, ABC’s World News Tonight used 35-seconds of its remaining airtime to cover the final vote and farewell speech of the scandal-ridden Republican Congressman Aaron Schock (Ill.).

Anchor David Muir played it up as “the big headline from Washington this evening” as Schock “cast[ed] his final vote” and “offer[ed] some parting words.” Following a soundbite for his farewell address, Muir noted that Schock mentioned how his Illinois district had once been represented by Abraham Lincoln prior to his time as president.

The transcript of the brief that aired on the CBS Evening News with Scott Pelley on March 26: 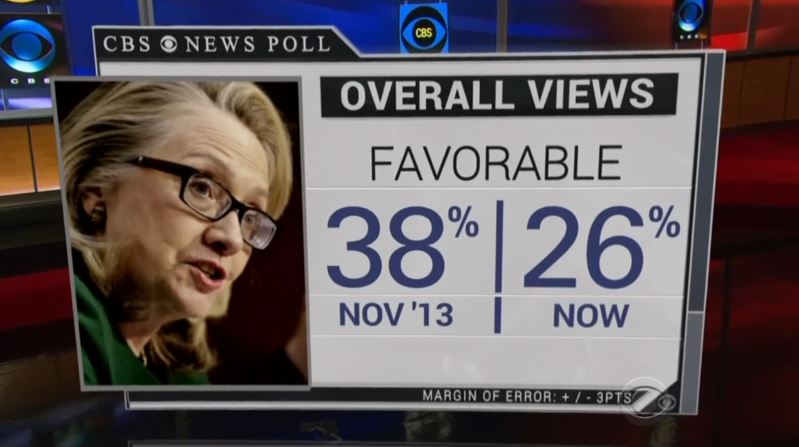 SCOTT PELLEY: That e-mail scandal is taking a toll on Hillary Clinton’s image as she gets ready to run for president. In a CBS News poll out tonight, 29 percent of Americans say their opinion of her has grown worse as a result of revelations that she used her personal e-mail account for State Department business. The number who view her favorably has fallen sharply from 38 percent to 26 percent and less than half, just 42 percent, say Mrs. Clinton is honest and trustworthy.

The relevant portion from ABC’s World News Tonight with David Muir on March 26: 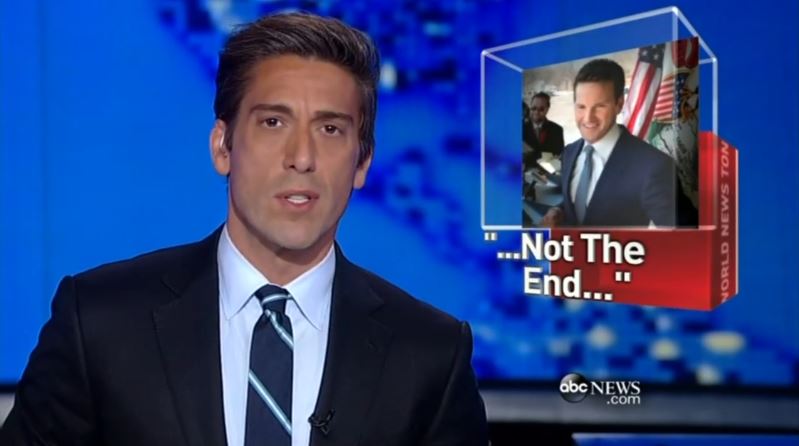 DAVID MUIR: And the big headline from Washington this evening, disgraced Congressman Aaron Schock resigning after questions about his Downton Abbey-inspired office makeover we reported on. That infamous magazine cover and tonight, back on Capitol Hill, casting his last vote. Offering some parting words.

REPUBLICAN CONGRESSMAN AARON SCHOCK (Ill.): I leave here with sadness and humility...and I know that this is not the end of a story, but rather, the beginning of a new chapter.

MUIR: Later, invoking Abraham Lincoln, pointing out that Lincoln held the same congressional seat from central Illinois for one term before becoming president.